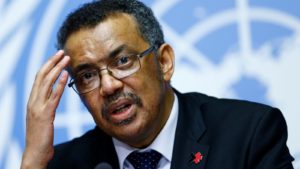 *Updated with news of withdrawal of appointment

The plan by World Health Organization (WHO) director-general to appoint Zimbabwe president Robert Mugabe as a goodwill ambassador has backfired and been rescinded after an international outcry.

Supporters and critics of the former Ethiopian health minister, Tedros Adhanom Ghebreyesus, aka Dr. Tedros, the first African to hold the WHO post, had taken to social media to express divergent interpretations.

“@DrTedros is well intentioned and right to try get national leaders involved in the [non communicable disease] battle,” tweeted Mukesh Kapila, Professor of Global Health and Humanitarian Affairs at the University of Manchester. “Health for all require us to engage all -leaders – not only the ones like!”

@DrTedros continues to engage world leaders to invest in health,” tweeted Senait Fisseha, a public health professor at the University of Michigan. Catherine Kyobutungi, executive director of the African Population and Health Research Center disagreed, tweeting: “If it’s about engaging all leaders, why of all places start with Robert Mugabe? This appointment diminishes the role of a goodwill ambassador. It is a meaningless gesture.”

Mugabe, 93, one of the longest serving leaders in the world, seems a particularly unusual appointment for goodwill ambassador, given his high profile as the leader of a government with a poor record of democratic freedoms.

Critics were particularly offended at the idea that Mugabe was appointed because of his contributions to public health given the collapse of Zimbabwe’s healthcare system under his watch, along with the country’s economy in recent years. Mugabe, along with several others African leaders, has long trips abroad for medical treatment.

Tedros said he had “listened carefully” to all those who expressed concerns and “heard the different issues that they have raised. I have also consulted with the government of Zimbabwe and we have concluded that this decision is in the best interests of the World Health Organization.”

With questions about Dr. Tedros judgment in the first place, it’s worth pointing out this WHO D-G, as a former senior leader of an authoritarian Ethiopian government, will be more comfortable with someone with Mugabe’s reputation than any of his eight previous WHO predecessors.

“Dr. Tedros uniquely stands out among the nine WHO D-Gs for his high-level position in a repressive government,” wrote Lawrence Gostin, the director of the World Health Organization Collaborating Center on Public Health Law & Human Rights, in an op-ed in June.

For the better part of his career, Dr. Tedros has always drawn sharply divided opinions, both at home and internationally. “Dr. Tedros’s record reflects a contrast between high hopes and genuine concerns,” wrote Gostin.

“As Health Minister, he transformed the Ethiopian health system,” he added. In fact, Tedros is widely credited with, among other things, creating an exceptional community health worker program and slashing child and maternal mortality rates by 60%. At the same time, the UN accused Ethiopia of covering up several outbreaks of cholera epidemics, under his stewardship as health minister from 2005 to 2012.

While Tedros’ precise role or stance in these policies is not clear, it is a fact that he was not just a simple technocrat. For example, in 2010, he was ostensibly No. 3 in the executive leadership of the ruling Ethiopian Peoples’ Revolutionary Democratic Front. That same year, the EPRDF won all but one of the 547 seats of legislature in general elections held in a context of repression.

As foreign minister from 2012 and 2016, Tedros became the face of a government that human rights groups accused of systematic torture, disappearances and repression of the media and civil society. In Ethiopia’s controversial 2015 general elections, Tedros’ ruling EPRDF declared that it won all 547 seats of legislature amid reports of continued repression..

“It would be unfair to blame Dr. Tedros for the Ethiopian government’s human rights abuses,” noted Gostin.

In fact, it is impossible to know whether Tedros was a voice of moderation within his government or how much of an impact his experience as a leader of an authoritarian government shaped his thinking. Notwithstanding, his desire to honor one of the world leaders most universally at odds with the values of WHO with an ambassadorship, albeit as a diplomatic engagement tactic, raises more questions than answers.