She is driven, she is precocious, she is intelligent, she is a leader of the future, today – her name is Mantate Mlotshwa, Mantate in the blogosphere.  Together with a network of friends, Mantate is mobilising youths to take part in the ongoing voter registration process. Find out how. A young woman on a mission

She is driven, she is precocious, she is intelligent, she is a leader of the future, today – her name is Mantate Mlotshwa, Mantate in the blogosphere.  Together with a network of friends, Mantate is mobilising youths to take part in the ongoing voter registration process. Find out how. 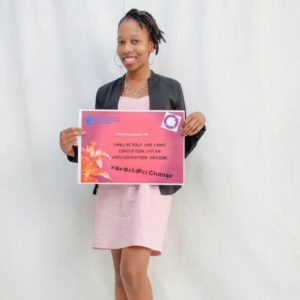 A young woman on a mission

ilizwi263: You are so young, so one would have to ask: Why does all that you do matter to you? You could be thinking of less stressful things

Mantate: From a young age I have always had peers looking up to me, or asking me for help in one way or another. Sometimes it’s the older people always telling me I set an example for their children. This combination constantly reminds me that I have something that not every young person has, a gifting and access to opportunities which when I explore I am able to impact positively on those that look up to me. So it matters so much to me how I use the talents and skills I have to inspire more youths and to drive change.

ilizwi263: But why does it matter to you if Thabani or Tarisai register to vote?

Mantate: Thabani or Tarisai may not have had the opportunity to discover the value of their vote. It matters to me that they do, hence the drive to create a platform that allows Thabani or Tarisai to participate in voter registration.

More than that, the youth form a significant percentage of eligible voters in Zimbabwe, the more youths that register to vote, the greater the possibility of compounding and quantifying the youth voice in elections.

ilizwi263: For the benefit of those who haven’t heard about the initiative you are driving, please tell us about it

Mantate: The #5x5Zim Campaign is a simple, but exciting initiative that we launched in Bulawayo three weeks ago. The power of 5 concept, upon which the campaign is built, was designed by a South African youth leader called Nangamso Kwinana, at the 2017 Generation Democracy Youth Leaders conference. It calls for every young person in Zimbabwe to commit to encouraging and ensuring that 5 other young people get registered to vote with their guidance. The 5 then also get 5 more youths each and it becomes a web of registered youths.

Our second approach to the campaign has been identifying organizations, churches, universities and colleges that already have young people under them. We them partner these institutions and help them to mobilize and administrate the registration of their youths to ensure that all their youths register. The campaign aims to educate youths on the BVR, provide information on the process and centres as per phase as well as navigate discussion on the value of the youth vote

ilizwi263: Is your movement affiliated to any political party or candidate for 2018 polls?

Mantate: Fortunately no. The call to register to vote is an apolitical appeal and to present an initiative that gives one access to youths of all affiliations means that the goal of a maximum youth voter registration is achieved as all resistance or tension normally associated with affiliation is ironed out, and no youths are left behind.

ilizwi263: So you would be happy to escort two people, one in an MDC T-shirt and the other in a Zanu PF java print shirt?

Mantate: No, not in that way. It’s more like church. While we may have a Zanu PF and MDC youth coming to the same church, they do not bring their slogans to church nor wear their T-shirts to the church outing, because they might just end up biting each other. The power is in being able to make young people understand that the #5x5Zim Campaign is a platform that calls for every young person, despite affiliation, to register to vote. This means that while they may have differences, they both need to be brought to the reality that they need to be registered to vote, and allow their vote to speak of their preferred affiliation.

ilizwi263: How many of your peers have registered as first time voters as a direct result  of your encouragement?

ilizwi263: Whose resources are you using for transport, food and other expenses?

Mantate: The campaign is basically a zero budget start up, progressively we might have supporting individuals or institutions resourcing it but for now it’s working at zero dollars.

The first group for instance, we agreed on a day that people were flexible with and people paid their transport into town. Then the group walked together to Famona. If walking as a group, it’s a bit more fun and less exhausting- Famona is a walkable distance from the CBD. When people got there and hours later, the process was still slow, they simply walked away.

This was a major setback, but it also taught my team a lesson to how a big group in one centre can be a challenge, hence a need for us to try and rethink and go with smaller numbers per day and centre, to ensure all youths on that day register.

Mantate: For now, no one.

ilizwi263: Is this initiative going nationwide or you will only focus on Bulawayo youths?

Mantate: It’s definitely aiming at nationwide reach. We have young people in Harare, Victoria Falls, Gweru and Beitbridge so far. We are working on building the capacity of these to coordinate the initiative in their towns so that they reach young people outside Bulawayo. Hopefully, more towns will gain interest and join the campaign.

ilizwi263: In order to accelerate growth of the initiative, what assistance would you like from government, citizens, private sector and NGOs?

Mantate: Fundamentally, we would like these institutions to avail themselves so that we know the type of youth structure they have and how best we can help them mobilize them for registration. This includes them recognizing the need to resource the process for their respective youth groups in terms of probably providing transport for the youths, affidavits and anything else that might prove necessary for the success of the partnership. For organization or movements with established youth-targeted registration goals, it would be great to access mentorship and training for the youth coordinators of the #5x5Zim Campaign so that we can do more in more towns across Zimbabwe.

ilizwi263: Have you considered making a televised or radio broadcast appeal for assistance with:

Mantate: Actually those have been in mind and a part of our objectives in terms of resource mobilization. Thank you for the idea of a radio and television appeal because that will definitely go a long way.

I managed to sit down with is Samukeliso Khumalo , the Director of Women’s Institute for Leadership Development WILD Trust on Wednesday the 4th of October and she was very excited about the campaign. So we are happy to say that as an established organization, they have agreed to partner with us, so that through the synergy we are able to access resources as per your indication above that they are crucial to the success of the campaign.

We will definitely tap into radio, television and newspaper platforms to reach out to more organizations and companies that can help resource the campaign.

ilizwi263: In your opinion, whose job should it be to encourage voter registration: State, NGOs, politicians or ordinary people such as yourself?

Mantate: I strongly believe that everyone, in their space and radar of influence, has an obligation to encourage people to register to vote. The basis of my view is that if we wait for one specific stakeholder to do it, they will only but reach out to a fraction of the population that’s targeted. Look at ZEC for instance, while their aim is to get approximately 8 million Zimbabweans registered, they evidently cannot encourage and ensure that 8 million register without the help of such initiatives as our #5x5Zim Campaign.

ilizwi263: Do you have political aspirations?

Mantate: Yes I do. Under the current constitutional regulations for presidential candidates, I want to run for President in 2043. Should there be a reduction in the minimum age requirement for one to run for the presidential office, I will definitely run earlier.

ilizwi263: What do you personally want out of the 2018 election?

Mantate: I want the youth vote to speak truth into power.

ilizwi263: What final words do you have for Zimbabwean youths, and even older citizens?

Mantate: Change is a practical process. It starts in the decisions we make to act based on principles and values that define us, as an individual and then as a community. While we cry everyday for change, we forget that change begins with each individual, the choice they make to take responsibility and participate in developmental processes. When you choose integrity in your dealings as an individual, you reflect on your belief that the nation can only be sustained by integrity at all leadership levels. When you vote, you are claiming ownership of your country and claiming right to call to account those that you elect to lead you. My hope and aspiration is that every Zimbabwean, young and old, would take it upon themselves to find their role in the journey Zimbabwe is taking, and encourage others to do same. If we all unite in definitions the nation we envision, then inevitably, we will find ourselves working towards it.