In the past the constitution of Zimbabwe and other legal instruments were not providing for Zimbabweans abroad to vote. However, the 2013 Constitution makes provision for a diaspora vote but unfortunately the country is still to align its laws to the supreme law. By SALLY NYAKANYANGA. 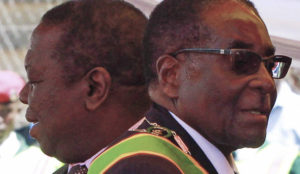 Last week, Gabriel Shumba, Sibonile Mfumisi, both based in South Africa, and Darlington Nyambiya in the United Kingdom filed a court application for direct access to the Constitutional Court of Zimbabwe to address the constitutionality of the provisions of the Electoral Act (Chapter 2:13). The act thwarts Zimbabwean citizens living and working abroad from participating in elections unless they physically go back home in order to exercise their political rights.

Belinda Chinowawa from the Zimbabwe Lawyers for Human Rights (ZLHR) working in collaboration with the Southern Africa Litigation Centre is representing the trio. The application is lodged against the Zimbabwe Electoral Commission, Minister of Justice, Legal and Parliamentary Affairs, Attorney General’s office, Ministry of Finance and Foreign Affairs.

“On behalf of Zimbabweans in the diaspora, the application is based on a contention that the residents’ requirements imposed under the Electoral Act is unconstitutional. My clients feel that the new constitution which provides political rights allows for every citizen of Zimbabwe to participate in political processes wherever they are,” Chinowawa said.

In his founding affidavit, the first applicant, Shumba, argues that due to his representation of an opposition party political activist in 2003, he was tortured, abducted and charged with attempting to overthrow the government through unconstitutional means. Despite the charges later being dropped, Shumba’s states that this harrowing experience forced him to flee the country for his safety and that of his family.

“In 2008 I was confirmed as a refugee in South Africa, making me unable to resume residence in Zimbabwe,” the affidavit reads.

The other applicants are Mfumisi, an office administrator based in South Africa who left the country for economic reasons, and Nyambiya who is based in the UK and who left for the same reason.

Section 23(3) goes further to state that a voter “who is registered on the voters roll for a constituency shall not be entitled to have his or her name retained on such roll if, for a continuous period of 12 months, he or she has ceased to reside in that constituency”.

“As a result of these provisions, my co-applicants, myself and millions of other Zimbabweans based abroad do not qualify for registration on the voters roll,” Shumba explains in the affidavit.

However, Section 67 of the constitution sets out the political rights of citizens, with Section 67l(3) particularly provides that “every Zimbabwean citizen who is of or over 18 years of age has the right to vote in all elections and referendums and to do so in secret”.

Dewa Mavhinga explained that the Constitutional Court application lodged by Zimbabweans in diaspora is the second such challenge after the first one failed in July.

Addressing journalists, Zimbabwe Electoral Commission (ZEC) Chairperson Rita Makarau went on record saying: “Whether we will be able to make them vote in diaspora, quite a few things must happen and one of them is that the Electoral Act must be aligned to the constitution and provide the mechanism through which the diaspora vote will be administered.”

Justice Makarau said in the event that the Electoral Act is aligned to the constitution, ZEC would either set up polling stations in the different countries where Zimbabweans are resident or turn embassies into polling stations.

However, lawyer and Deputy Dean of Law at the University of Zimbabwe, Sylvia Chirawu believes it is still a pipe dream. “I don’t see it happening at all in the current discourse and conditions. It is one of the issues that are hard to push for,” Chirawu added.

Mavhinga is hopeful if the judiciary could not be influenced by political forces. “There are high chances of success but the real challenge that could result in the failure of the application is that the Zimbabwe’s judiciary is not fully independent and subject to undue political influence.”

Shumba and co-applicants believe that they have high prospects of success as the supreme law of the country provides for such.