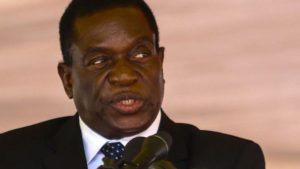 It follows Mr Mnangagwa’s claim that he was poisoned.

The governing Zanu-PF has been battling to contain tensions within the party between rival groups wanting to succeed President Robert Mugabe, 93.

Mr Mnangagwa and First Lady Grace Mugabe are seen as the frontrunners.

In a press statement, Mr Mphoko accused his counterpart of lying about being poisoned in August.

Mr Mphoki is currently the acting president as Mr Mugabe is out of the country.

Mr Mnangagwa fell ill in August at a political rally led by President Mugabe and had to be airlifted to South Africa.

Over the weekend, Mr Mnangagwa said someone had tried to poison his food. His supporters suggested a rival group within Zanu-PF was responsible and appeared to blame ice cream from Mrs Mugabe’s dairy firm.

Vice-President Mphoko says doctors had confirmed to the president that stale food and not poison was to blame.

He said the latest claims show an agenda to “undermine the authority” of the president and fuel tensions within the party.

This is extraordinary criticism of one vice-president by another and brings the festering tensions within the party into the open.

Last month, First Lady Grace Mugabe told a rally that both she and the president had been having sleepless nights because of accusations that it was ice cream from her dairy business that had been laced with poison.

Zanu-PF appears split into two sides, and despite President Mugabe’s attempts to halt the infighting, it only seems to be getting worse.

On one side are Mrs Mugabe, Mr Mphoko and Defence Minister Sidney Sekeramayi, known as Generation 40, or G40.

On the other are Mr Mnangagwa and his supporters, who include many government ministers and army generals. They are known as Lacoste, from his nickname ngwena, or crocodile.

It is not clear whether President Mugabe approved this statement directly. But as acting president, it is likely that Mr Mphoko would have made him aware of his intention.