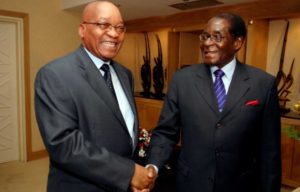 The pair will attend the second session of the South Africa-Zimbabwe Bi-National Commission.

Zuma and Mugabe will review the state of the bilateral relationship between the countries.

More than a hundred South African companies do business in Zimbabwe.

This is Mugabe’s first visit after his wife, Grace, was accused of assaulting a woman at a Johannesburg hotel in August.

She was subsequently granted diplomatic immunity against the charges.