SOMETHING is definitely not right at Air Zimbabwe Corporation. At independence in April 1980, Air Zimbabwe, formed from the ashes of Air Rhodesia, inherited no less than 14 fairly new aircraft. 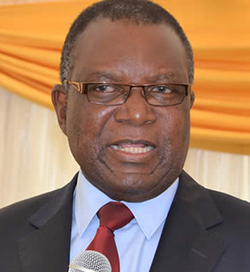 Thirty seven years down the line, AirZim has been vandalised and ransacked to such an extent that there are only just about four serviceable aircraft owned by the national airline. The MDC-T is deeply concerned by the continued bleeding of our national pride, AirZim. From having a tradition of caring in the early years soon after independence, AirZim has now assumed the dubious distinction of having a tradition of scaring; a sordid and deplorable reputation where flights are routinely delayed and/or cancelled and passengers, are forced to travel aboard old, dilapidated and noisy aircraft.

Recent events at AirZim literally read like a horror movie story line. One Simba Chikore, the son-in-law of President Robert Mugabe, is virtually in charge of the national airline, at the moment. The chief executive officer, captain Ripton Muzenda, has been suspended from employment under extremely shadowy and suspicious circumstances. As if this was not enough, Transport Minister Joram Gumbo is being very edgy and conservative with the actual details and reasons surrounding captain Muzenda’s suspension from employment. The whole incident smacks of a complete dog’s breakfast.

What the hell is Zimbabwe Airways? Who owns this private airline company? Is the Mugabe family not the actual and beneficial shareholders of Zimbabwe Airways? Recent press reports have disclosed that Zimbabwe Airways has clinched a multi-million dollars deal in terms of which the privately – owned airline will be leasing four long – haul Boeing 777 aircraft from Malaysia Airlines.

This deal stinks to high heavens. At a time when AirZim is virtually on its knees and is burdened by a colossal debt of no less than $300 million, minister Gumbo and the Air Zimbabwe de facto boss, Simba Chikore, are busy wheeling and dealing on behalf of and for the benefit of a privately-owned airline, Zimbabwe Airways.

There is a serious conflict of interest and gross abuse of the basic tenets of good corporate governance in this whole transaction. Put bluntly, this transaction is blatantly opaque, unjustifiable and downright corrupt. Parliament must immediately move in to get to the bottom of this scandal in our aviation industry. The full details of the Zimbabwe Airways transaction, chapter and verse, have to be disclosed for the benefit of the nation.

Why is Gumbo globe-trotting, at the State’s expense, to cut deals on behalf of a privately-owned airline whilst our own national airline, AirZim, is almost bankrupt? Whose agenda is Gumbo pushing? And why is the AirZim de facto boss, Chikore, consulting on behalf of a competing private airline, Zimbabwe Airways whilst he remains on the payroll of our national airline? Something is definitely not right here!

The MDC-T is totally disappointed with the public disclosure that Zimbabwe Airways will soon be flying the highly lucrative Harare-London route whilst AirZim remains virtually comatose. In fact, both Gumbo and Chikore have to be thoroughly investigated by the Zimbabwe Anti-Corruption Commission. They have got a prima facie case of high level corruption that both men have got to answer to. We cannot just stand aside and watch whilst an important national asset, Air Zimbabwe Corporation, is being bled into bankruptcy and oblivion in order to privately benefit a few politically well-connected people.

The MDC has got a zero tolerance policy towards corruption and as such, we demand that a no -holds-barred and exhaustive forensic audit be immediately instituted into the business affairs of Air Zimbabwe Corporation. More importantly, both Gumbo and Chikore must give the nation a detailed and satisfactory explanation of the exact role that they are playing in the business affairs of a competing private airline, Zimbabwe Airways.