The Vigil has been sent the following message from a reliable source in Zimbabwe: 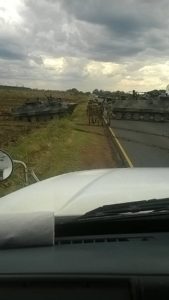 Plans for a Solidarity March in support of the Zimbabwe Defence Forces in removing Mugabe are at an advanced stage. Saturday 18th of November has been declared an independence day as Zimbabweans are going to march to State House to remove Mugabe from power, starting from Robert Mugabe Square in Harare.

1. The military and the war veterans are fully behind the march.
2. MDC alliance and all other opposition parties are behind the march
3. Public transport including combis will be transporting people for free to Harare in support of the march
4. No police/army will block the march as they are behind the march
5. Spread the news to every Zimbabwean and make sure you help in any way to make sure this march is a success
6. Once we all come together and march we are sending a clear message to SADC AU EU and the whole world that we are actually supporting our army and we are tired of Mugabe
7. Remember what happened in Egypt, The people had the army behind them and their march against the president was successful
8. Let’s get this issue done and dusted, we cant afford to have Mugabe back as president with his wife.
9. We cant have a 93 year person ruling more than 15 million people
10. *ZIMBABWEANS THIS IS OUR CHANCE TO START A NEW ZIMBABWE, THIS IS OUR CHANCE TO REMOVE MUGABE FOR GOOD*
*MAKE SURE YOU TAKE PART IN THE MARCH AND MAKE SURE YOUR FRIENDS AND RELATIVES DO AS WELL*

Start by sending this message to all your contacts.

*A NEW ZIMBABWE IS POSSIBLE*

For the Vigil’s part, we will hold a special demonstration in support of the ousting of Mugabe on Saturday outside the Zimbabwe Embassy in London from 2 – 6 pm. Mugabe and Grace are bound to drop by to say farewell on their way home to Singapore. To make sure they behave there will be soldiers present.

If you want to know more about the events leading up to the army coup see the newly-published book by the Vigil: ‘Zimbabwe Emergency’ available from the Vigil and Amazon. Also on sale will be our ‘hedging our bets’ wristbands with the message ‘Mugabe must go / has gone’.