A blatant violation of the constitution 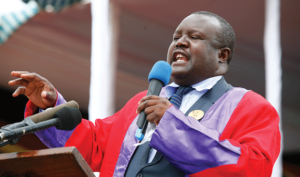 Zimbabwe Lawyers for Human Rights (ZLHR) is greatly concerned by the blatant disregard of the Constitution by the leader of traditional leaders Chief Fortune Charumbira.

On 28 October at the official opening of the 2017 National Conference of Chiefs in Bulawayo, Chief Fortune Charumbira, who is the President of the Chief’s Council, called upon chiefs to campaign for President Robert Mugabe in the 2018 national elections. Chief Charumbira also said that the chiefs must support  President Mugabe as the ZANU PF 2018 presidential candidate because, so he claimed, he recognises and respects traditional leaders. He further indicated that Mugabe was the candidate for chiefs in 2014 as agreed during the congress at the time.

Traditional leaders are not supposed to be members of a political party or in any way participate in partisan politics – section 281 (2)(a-b) , act in a partisan manner and further the interests of any political party – section (281)(2)(c) of the Constitution.

ZLHR strongly condemns affiliation and active participation of traditional leaders (chiefs, headmen) in party politics as this compromises the  impartial discharge of their traditional duties and is a violation of the Constitution.

ZLHR calls upon Chief Charumbira to lead by example and ensure that the provisions of the Constitution are respected.