ZIMUNYA, ZIMBABWE — Henry Fusirayi Nzarayebani, an elder in Zimunya, a village in eastern Zimbabwe, walks slowly toward plants growing at the edge of a narrow dirt path. 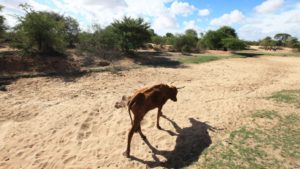 Impoverished cattle walk along a dried-up riverbed in Chivi, Zimbabwe. Zimbabwe experienced a devastating drought in 1992, and has since seen increasingly frequent and recurring dry spells. Between 2015 and 2016 the country suffered a crippling drought, linked to El Nino, that wiped out crops, wild plants and livestock.

He plucks a few leaves from a shrub nearly hidden amid a thicket of invasive Lantana camara plants, then rubs the leaves between his hands and sniffs the scent.

“These leaves are used to treat stomachaches,” Nzarayebani said with a smile. “You either boil the leaves, then drink the water, or you can chew the leaves raw and swallow the juice. These leaves are good for treating any kind of stomach upset.”

But such medicinal plants are growing rarer in Zimbabwe these days. Overharvesting can be a problem, as can competition from other plants. But one of the most serious problems appears to be the country’s lengthening droughts, associated with climate change.

“Unfortunately, this plant is becoming scarce,” said Nzarayebani, standing near a small dry riverbed, which in wetter seasons gushes — temporarily — with water.

“Ever since the 1992 drought, this plant has been disappearing, and is now only found in a few spots near the river. At times people are now traveling high up the mountains to look for some of these herbs,” said the expert in traditional herbal medicine, a skill passed down in his family for generations.

Zimbabwe experienced a devastating drought in 1992, and has since seen increasingly frequent and recurring dry spells.

Between 2015 and 2016 the country suffered a crippling drought, linked to the El Nino weather phenomenon, that wiped out crops, wild plants and livestock. 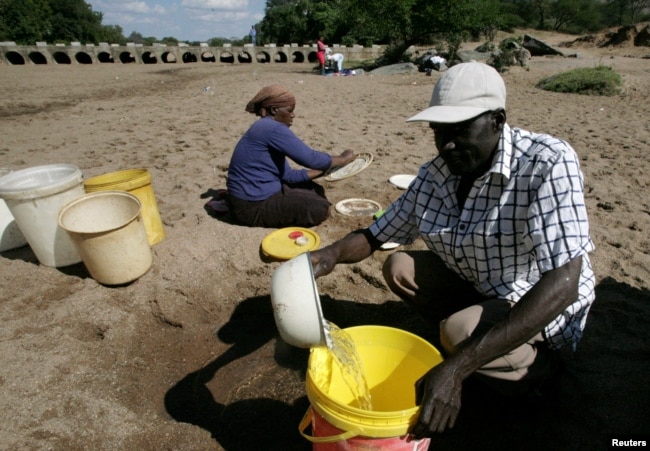 That is a particular problem for the large number of people in remote rural areas who rely on medicinal herbs because they live too far away from clinics or because the clinics — short of foreign currency — don’t stock the drugs they need.

In particular, many people turn to plants to treat high blood pressure, stomachaches and sexually transmitted infections, among others, herbalists said.

But those plants are disappearing. Nzarayebani said he had seen 10 plants he has long relied on disappear in the past few years.

“Even when the rains come, some of the plants are not coming back. It seems they have disappeared forever,” he said.

“This year we received very good rains but some of the herbs, particularly those used to treat sunken fontanel in babies, have completely disappeared,” he said.

He said he still held out hope that some would return if rains remained good.

Another village elder, Albert Mutasa, said the disappearance of the long-relied-upon plants was a growing concern for many local people.

“We are worried that our source of medicines is fast disappearing,” Mutasa told the Thomson Reuters Foundation. “I used to get a plant known locally as mutsombori to treat various sicknesses at the wetland nearby, but due to the droughts experienced in the past years, the wetland is gone and the plants are gone, too.”

He said prolonged droughts appeared to have killed even the underground tubers or bulbs that had once helped plants regenerate once rains returned.

“The plants are disappearing, both fruit and herbal medicines, but we cannot do anything. Some of these plants need a lot of water. The water is now scarce,” he said.

Lawrence Nyagwande, a plant expert with Environment Africa, an environmental organization based in Zimbabwe, said there was little doubt that droughts linked to strengthening climate change were a big contributor to the loss of Zimbabwe’s medicinal plants.

“Definitely there is a link,” he said. “If some plants are disturbed by droughts they will not regenerate even when the good rains come.”