Residents of Eastlea and Hillside are battling to stop the construction of a bus terminus in their area. 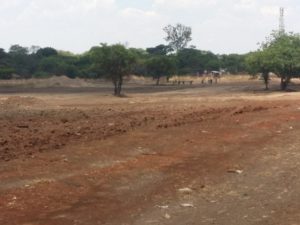 City of Harare is currently constructing another holding bay for commuter omnibuses from Northern routes including Mabvuku, Ruwa, Zimre Park and many others

The Harare City Council has already started construction of the bus terminus along Robert Mugabe Road opposite Rhodesville police station.

The residents contend that they were never consulted on the project and only learnt about it in the press.

As part of their concerns, the residents also contend that the construction of the bus terminus will attract criminal elements “and this will spill into our neighbourhood”.

The residents also say there is high potential of disease outbreaks given the fact that their area is affected by erratic water supplies which are characterizing most areas in Harare.

There are concerns from environmentalists that the area earmarked for the construction of the bus terminus is a wetland hence any form of construction on it was illegal.

The residents also claim council did not get an Environmental Impact Assessment (EIA) certificate to start developments on the area. An EIA certificate is only issued after wider consultations with residents.

Harare wetlands are under continuous threat as a result of developments being implemented without paying due regard to preserve these major sources of water for Harare.

This is despite the fact that the Zimbabwe National Water Authority (ZINWA) has raised the red flag saying the continued destruction of wetlands in Harare has resulted in the water table drastically falling.

In a letter dated October 25, 2017 and addressed to acting Harare Town Clerk, Josephine Ncube, the residents of Eastlea and Hillside said they were shocked to learn about the construction of the bus terminus in the press.

“We, the residents of Eastlea and Hillside were surprised to learn in the press of council’s intention to build a bus terminus and People’s Market opposite Rhodesville police station. There has been no consultation with local residents on such a significant and impactful project and we are deeply concerned that the project seems to have already started,’” read part of the letter.

“The moving of the terminus to our neighbourhood is really a case of exporting the problem and not addressing it. The problems that this project will bring will inevitably result in loss of value of properties in the area and we strongly oppose this development,” read part of the letter addressed to Ncube.

On October 25, 2017 a meeting was held between the community members and officials from the Harare City Council and the acting Director of Works, Priscilla Charumbira said the objective behind the construction of the bus terminus was to get rid of kombis in the CBD and create a mass transit system.

“As a city, we cannot be seen to just get rid of the kombis overnight. Our vision is to gradually get rid of them by planning the infrastructure and systems that will enable us to do that. We didn’t quite get political support in the past and as a result there was a lot of chaos in the city centre.

“We have recently gotten political support at the highest level and this has been published in the press. We have the holding bay opposite Colcom behind the Kopje but it failed to operate because we could not enforce and make sure that the kombis are in their right places because of the lack of political support,” said Charumbira.

When contacted for comment, Harare City Council spokesperson, Michael Chideme confirmed that the city council was seeking to construct a bus terminus.

Contrary to the claims from the residents, Chideme however said that they had consulted residents before embarking on the construction of the bus terminus.