HARARE Magistrate Eric Kadye on Tuesday 07 November 2017 acquitted Blessing Mutasa, a resident of Epworth, who had been on trial for allegedly resisting a peace officer and causing malicious damage to property. 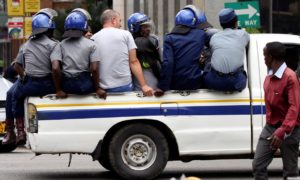 Due to his political affiliation, the 31 year-old Mutasa, who is the MDC-T political party’s youth Treasurer for Ward 4 in Epworth, was heavily assaulted by members of the ruling ZANU PF political party before being falsely charged and accused of having assaulted a peace officer and having maliciously damaged Aculine Dzingai’s property.

Prosecutors claimed that Mutasa, who was represented by Noble Chinhanu of Zimbabwe Lawyers for
Human Rights, intentionally and unlawfully damaged a saligna panel door with a shovel belonging to
Dzingai and unlawfully and intentionally stoned a peace officer intending to cause bodily harm.
But Magistrate Kadye on Tuesday 07 November 2017 acquitted Mutasa on account of inconsistent
statements given in court by witnesses who testified during trial.

The Magistrate ruled that there was no credible witness who observed the events independently who was
called to testify during trial and also noted that there were differing accounts of the events from the
witnesses which showed that the case against Mutasa was weak and brought significant doubt as to the
guilt of the Epworth resident.

Magistrate Kadye also noted that there was bad blood established between the complainants in the matter and Mutasa, which show possible malicious fabrication of issues by the complainants against the accused person.

In the end, Magistrate Kadye commented that people should live peacefully in communities regardless of their different political opinions and views and that if they belong to different political parties, this should be of no consequence as the country’s Constitution safeguards each person’s political preferences.