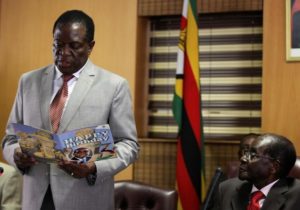 Pinging on the windows, rattling down the roof and bouncing on the baked ground, hail stones introduced a much needed rain storm to my home town yesterday. After a week of sizzling heat the thunder, lightning, hail and rain brought much relief, cooling temperatures, washing away dust and smoke and giving us something else to think about for a change.

For a couple of hours the rain and hail distracted us from the high political drama that’s unraveling nearly four decades of political hierarchy in the country. Putting years of gossip, rumor and speculation to rest, this week we saw the unceremonious exit of yet another Vice President. Three years ago it was Vice President Joice Mujuru being kicked out of office and this week it was Vice President Emmerson Mnangagwa. Since Independence these two people had been at Mr Mugabe’s side, in one role or another, and seen to be the main contenders most likely to succeed Mr Mugabe.

The dramatic firing of Vice President Mnangawa, first from his job as VP and then from the Zanu PF party, followed a few weeks of insinuation, insults and heckling and then WHAM, out he went. The Minister of Information, Ambassador Khaya Moyo held a press conference. He said that Vice President Mnangagwa had: “consistently and persistently exhibited traits of disloyalty, disrespect, deceitfulness and unreliability.”

Tuning in to the state controlled radio and television broadcaster, ZBC, the airwaves were awash with people wearing clothes adorned with President Mugabe’s picture saying how delighted they were with the firing of Vice President Mnangagwa. Hot on the heels of those praise singers came the Secretary of the Zanu PF Youth League, Mr Chipanga, saying they were now lobbying for a woman to take the newly vacated role of Vice President. Someone, Chipanga said, with “unquestionable loyalty”, someone “without ambitions to work against Mr Mugabe. The only person possessing such qualities,” he said, “is none other than Her Excellency the First Lady of the Republic, Amai Dr Grace Mugabe.”

There is of course another Vice President in Zimbabwe, Mr Mphoko, who came to notoriety after he spent much of his first year in office living in a top Harare hotel; he has been strangely silent throughout the latest dramatic expulsion.

While all eyes were on the political turmoil it seemed retailers were very busy changing the prices of almost everything while no one was watching. Just a week ago an independent weekly newspaper identified the alarming price increases of a few commodities. Here are a few of them with today’s price added:

There are now almost no items left on the shelves whose prices haven’t increased dramatically in the past two months. Most imported items (which includes 80% of the food we eat) have doubled or more than doubled, many locally produced items have gone up by 30-50%, some by 100% for no explicable reason except sheer greed.

Two months into the price crisis we have turned back the clock a decade and are again walking out of supermarkets empty handed because we just can’t afford the prices. Like the Grey Lourie bird singing in my garden as I write, we just “Go Away.”

After a week of high political drama and even higher surreptitious price rises the question we are all asking is: where are the opposition parties as Zanu PF splinters ever further? Are they grabbing this golden opportunity and stepping into the spotlight? Do they care about the desperate struggles of ordinary Zimbabweans? So far their silence is deafening.