Heal Zimbabwe launched its National Peace campaign: 13 Million Voices For Peace at a colorful ceremony in Harare on 09 November 2017. The launch coincided with a policy conference on peaceful elections ran under the theme “A Roadmap to Peaceful 2018 Elections”. 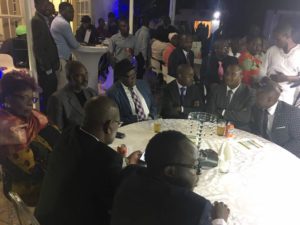 The objective of the policy conference was to provide an opportunity for various stakeholders to discuss the implications of past election violence and proffer possible solutions to mitigate and prevent violence ahead of the 2018 elections. The dialogue brought together representatives from various political parties, war veterans, Independent Commissions that Support Democracy, Civil Society, Community Based Organizations, Traditional leaders and the academia. The dialogue also afforded participants to share experiences on interventions to mitigate violence and proffer possible solutions to deal with emerging developments such as intra party violence that have potential of threatening peace and social cohesion. Discussions were also made on how stakeholders can coordinate each other around providing early warning and early response mechanisms in the event of political violence ahead of the elections. Stakeholders present also deliberated on how they can raise awareness on the need for peaceful elections in the country.

In his opening remarks, Heal Zimbabwe Executive Director, Rashid Mahiya made a presentation on the structure and nature of violence and intimidation in local communities. He highlighted that Heal Zimbabwe has noted an increase in cases of human rights violations from the time the Biometric Voter Registration (BVR) was launched. Mr. Mahiya encouraged participants to indulge in a conversation on how to promote peace ahead of the 2018 elections and the key violence preventive and mitigation efforts to be taken before, during and after the 2018 elections.

Participants then had a discussion on the Election environment scenario mapping after Professor Lloyd Sachikonye from the University of Zimbabwe made a presentation on the same topic. Participants unanimously agreed that it was important to identify measures that will best suit the current political context fully appreciating that the current economic crisis also has a bearing on the holding of free, fair and credible elections. Participants also resolved that Civil Society Organizations (CSOs) and churches were supposed to aggressively advocate for peaceful elections ahead of the 2018 elections through robust monitoring of the political environment and timeous provision of rapid response services. In mitigating violence, the policy conference resolved that CSOs and churches should engage Traditional leaders and political parties that perpetrate violence and identify possible community coordination mechanisms that can help prevent and mitigate violence. CSOs and churches were also urged to raise awareness on the importance of peace in their communities.

Representatives from the Zimbabwe Human Rights Commission (ZHRC) and the Zimbabwe Lawyers for Human Rights (ZLHR) also took participants through the constitutional provisions supporting peaceful elections. A representive from the ZHRC explained the role played by the ZHRC in monitoring, investigating and responding to incidences of human rights violations.

After a day of engagement and sharing ideas on possible solutions to mitigate violence, the National Peace campaign was then officially launched. Stakeholders present at the cocktail endorsed the National Peace campaign as a positive step towards the attainment of peace and highlighted their keenness to partner Heal Zimbabwe in amplifying calls for peaceful elections ahead of the 2018 polls.

As a way forward, Heal Zimbabwe will intensify and publicize the national peace campaign by conducting several peace initiatives such as collaborative neutral platforms, Peace concerts, target lobbying and advocacy, Sports for Peace tournaments, public awareness campaigns in both rural and urban areas. HZT will be at Gokwe Centre on 11 November 2017 where it will official launch its peace campaign in rural areas through a peace concert. The concert which coincides with the 2nd phase of the voter registration process will see HZT partnering ZIMRIGHTS and the Election Resource Centre (ERC) in mobilizing, educating and encouraging the electorate to register and vote in peace. The peace concert is being held close to three voter registration centres and ZIMRIGHTS and ERC shall be assisting people to register to vote.

Three commissioners of oath have been engaged to assist people with proof of residence. Participants at the peace concert shall be encouraged to pledge to uphold peace, before, during and after the 2018 elections through signing peace pledges. The organization shall make follow ups with those who commit to uphold peace and remind them of their commitment. The peace pledges shall also be used to hold people to account in the event that they are implicated in committing political violence. A popular musician, Soul Jah Love and other local upcoming artists from Gokwe shall provide edutainment.