Hundreds of Commonwealth veterans who fought for the Crown are living in destitution in Zimbabwe with the UK failing a “duty of honour” to support them, former ministers have warned. 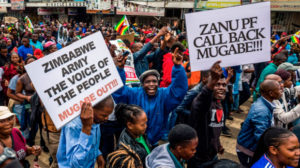 Campaigners said they had little hope any change in Zimbabwe’s leadership triggered by this week’s military takeover would alleviate the veterans’ plight and instead called on the UK Government to “honour its commitments” to them.

Around 600 surviving veterans of conflicts including the Second World War, Korea and Malaya have seen their pensions wiped out by hyperinflation and economic mismanagement.

The “forgotten legion” of veterans in their 70s, 80s and 90s are now existing without medical care and scraping by on only a meal a day, according to a new charity campaign.

Former ministers last night accused the Government of breaking its own military covenant by not supporting those who had fought on behalf of Britain.

The veterans served with Rhodesian regiments on behalf of the Crown and were supported by the former Rhodesian government.

But the economic policies of Robert Mugabe’s regime have seen their pensions and savings wiped out, while the veterans themselves have been abandoned by the state.

Iain Duncan Smith MP said: “In its darkest hours of the last century, this country turned to men across the Commonwealth for help, signing them up to fight for the British Crown, most particularly during the Second World War.

“Many came from Rhodesia, now Zimbabwe. Upon their return to Zimbabwe, they have been subject to political and economic turmoil with crippling hyperinflation that wiped out the value of their pensions overnight. They have been left destitute.”

“When they signed up to serve the Crown, they did so in return for a promise that they would be cared for by the British government under the solemn oath of the military covenant. That promise must be fulfilled.”

Julian Lewis MP, chairman of the Commons defence committee, said: “Britain has a great tradition of honouring its international obligations and these veterans should be no exception.

“These are the last of a generation of foreign soldiers who served the Crown. They deserve to be properly cared for in return for the huge sacrifice they made for us.”

The Zimbabwean veterans are at the centre of a campaign launched by Zimbabwe A National Emergency (ZANE), a charity raising money on behalf of pensioners in the country.

Tom Benyon, a former Conservative MP who founded ZANE, said: “These veterans have served the Crown. Undoubtedly Her Majesty’s Government have a duty of honour to honour the military covenant, which they haven’t done.”