The President-elect of Zimbabwe, Emmerson Mnangagwa landed at Manyame airbase this afternoon and went straight into a meeting with military generals. 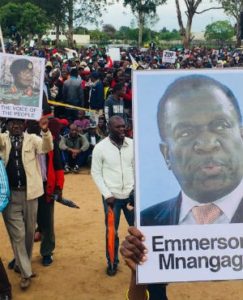 He is expected to go on to the  Zanu PF headquarters where he is due to chair a meeting of his party’s Soviet-style politburo. Hundreds of supporters have gathered outside the party’s headquarters, known as shake shake house, expecting the new leader to address them.