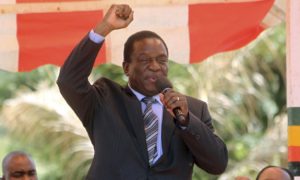 “I shall return to Zimbabwe to lead you,” says Mnangagwa in a statement released to several news sites this afternoon.
“I will fight tooth and nail…You and your cohorts will instead leave  Zanu-PF,” says the statement.

The day full of drama started with reports that Mnangagwa and his family had been turned back while trying to flee to Mozambique.

This is the full text of a statement purported to have been issued by him this afternoon :
My family was banished to Zambia when I was still  in primary school for resisting the oppressive rule of the white minority regime in 1955. This action hardened my resolve for justice and black empowerment. I joined the United National Independent Party (UNIP) led by Dr. Kenneth Kaunda at a tender age and have been active in politics ever since. At 18 years of age I was recruited by the late Willie Musarurwa to join ZAPU and sent for military training to Tanzania and Egypt. A year later in August 1963 to be precise, I broke away with some cadres to join the newly formed Zimbabwe African National Union. I was subsequently sent for advanced military training in China which I completed in May 1964. Some of my group members were Edson Shirihuru, Lawrence Svosve, John Shonhiwa and James Mudavanhu. We became known as the famous Crocodile Group. Despite the hardships of the times, we operated in Zimbabwe (Rhodesia) travelling entirely by foot in order to avoid arrest.

Some of my colleagues were betrayed by sell outs, arrested and hanged. The same fate befell me in 1965, I was arrested, tortured and sentenced to death. The death sentence was subsequently commuted on a technicality to ten years imprisonment which I served in various prisons in Zimbabwe while at the same time I advanced my education through correspondence.

After my release, I was deported back to Zambia where I completed my Law Degree. After my Law Degree, I voluntarily left Zambia to join the Liberation struggle in Mozambique in 1976 where I was assigned as the Special Assistant to the President, Cde R.C. Mugabe. This role was reconfirmed at the Chimoio

Congress in 1977. I have been very close to the President ever since. We have avoided life threatening situations together. I even doubled up as his personal bodyguard. In return, the President has passed on to me life skills which have put me in good stead throughout my long period in government. Our relationship has over the years blossomed beyond that of master and servant but to father and son. My mouth has never uttered a single foul word against the President nor have I ever contemplated bringing him harm in any way. I therefore find it preposterous that any sane person can lyrically direct such accusations towards me.

Of late, I have been vilified beyond measure. My service to the party and government of Zimbabwe and my public and private posture towards my boss are well known. No amount of lies and convoluted thinking can diminish my loyalty to my party and the President. I have never appointed or surrogated myself in any position in the Party or in Government. I remain firm and resolute against those who plunder public funds and are used by foreign countries to destabilize the Party. These same people are brazenly protected in public by the First Lady thereby making a mockery of our public institutions. I stand prepared, once again, to pay the ultimate price in defence of Zimbabwe. I am not afraid of anyone or worried about my political future under the current “Party Capture” that is being tolerated and condoned by the First Family. I implore all genuine members of ZANU PF to reject this “Party Capture” by a few individuals as I hereby do unequivocally. This is not the Zanu-PF we established with the late Dr. J. M Nkomo and other luminaries who have passed on. This is now a party controlled by undisciplined, egotistical and self-serving minnows who derive their power not from the people and party but from only two individuals in the form of the First Family who have now privatized and commercialized our beloved institution.

It is regrettable that after 37 years of unbroken service in government. I am now being hounded out by minnows who have no liberation credentials or clear understanding of our constitution in Zanu PF. We must reject this insane and “idiotic , habit of expelling and suspending members of the party merely because we differ in opinion or have brighter and more progressive ideas of improving the lives of our people, to quote Cde R G Mugabe’s own adjective.

Your Excellency and First Secretary of Zanu PF, it is sad and deplorable that you have allowed our Party to be hijacked by novices and external forces as well as individuals who have a proven record of treachery. This Party is NOT PERSONAL PROPERTY for you and your wife to do as you please.

Now that you have clearly told the world that I am your enemy who has taken in excess of 50years to formulate a plan to dispose of you, I now urge all the genuine members of the Party to determine for themselves who between the three of us including your wife and the notorious G40 boys is the enemy of the Party and who the real culprit is in destroying our beloved Zanu-PF.

Zanu PF is anchored on core values which promoted unity, peace and development regardless of ethnicity. I find it abhorrent and repulsive to separate the nation by region and province which is anathema to our founding principles. My emphasis is for the nation to unite to create peace and development. This particular accusation is nauseating when the First Lady prefers to have the song “Zezuru Unconquerable” played and sung at rallies she has held many times over. Who is the tribalist here?

I have been accused of committing treasonous acts dating back from 1980.

This is not only fake but laughable and the President knows that. Why, why, the people are asking did you keep this man for so long and not have tried him for treason all these years?

Those who violate our Party code of conduct because they think they have now out grown Zanu PF are free to go and form their own parties. I will go nowhere.

Iwill fight tooth and nail against those making a mockery against Zanu PF founding principles, ethos and values. You and your cohorts will instead leave

Zanu-PF by the will of the people and this we will do in the coming few weeks as Zimbabweans in general now require new and progressive leadership that is not resident in the past and refuses to accept change. My conscience obliges me to uphold the code of conduct of my beloved party and I refuse to be drawn into a public circus.

Religious gatherings should be used to preach love, peace and harmony not to spread hate speech and political intolerance. It was regrettable that men and women of the cloth were abused this past Sunday (5-1 1-201 7) by non-other than the First Lady who spewed fake news, unfair and irresponsible comments about myself and character in an atmosphere which should have focused on Peace, Love, Unity and Development. This is grossly unfair and I was never given a chance to defend myself or at least proffer an explanation to the false and malicious accusations made against me.

Fellow Zimbabweans and specifically members of Zanu-PF, the time is now to say NO to Demi Cods and people that are self-centered and only think of themselves and their families. Let us bury our differences and rebuild a new and prosperous Zimbabwe, a country that is tolerant to divergent views, a country that respects opinions of others, a country that does not isolate itself from the rest of the world because of one stubborn individual who believes he is entitled to rule this country until death.

We want a country that gives every citizen the opportunity to prosper, to  take care of their families, a country that encourages Zimbabweans to invest in their economy and contribute to the development of infrastructure for future generations. This is part of my vision for a rejuvenated

All loyal members of the party to remain in the party to register to vote as we will very soon control the levers of power in our beautiful Party and country. “Let not your hearts be troubled for peace, love, unity, development and prosperity are around the corner.” I will be communicating  with you soon and shall return to

Zimbabwe to lead you. 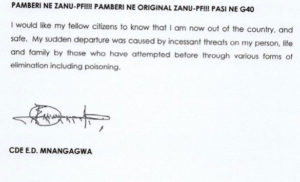 I would like my fellow citizens to know that I am now out of the country, and safe. My sudden departure was caused by incessant threats on my person, life and family by those who have attempted before through various forms of elimination including poisoning.