The pending question being asked by the struggling and very patient citizens of Zimbabwe And the world over is, will Emmerson Mnangagwa be better than Mugabe? Or Is He not the Same as Mugabe?. 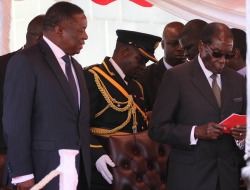 Mugabe with Mnangagwa at Muchemwa’s burial

The rule of the nonagenarian has been interpretated differently by different people all over the world. Zimbabweans see him as a savior turned devil, while most Africans see Robert mugabe as a Savior And Revolutionalist who has done nothing but good for Zimbabwe ‘ lawfully ‘ in some parts ( hence protection from so many regional bodies who fear a ” great ” leaders fall ).

Zimbabweans have been through so much under the rule of Robert mugabe but he did his part as a leader and kept his word and promises for some time a good example being ” zimbabwe never being a colony again ” but atrocities And misconduct of office came into play during his rule.

While Mugabe was Flanked by Mnangagwa during his tenure in so many different ways and for so long, zimbabwe experienced hyper inflation, election misconduct, suppression of human rights to mention a few. So the question stands, is or will be Emerson mnangagwa any better?

To cut to the chase, The Former Vice president of Zimbabwe Emerson Mnangagwa is firstly younger than Robert Mugabe that is one major factor. Robert Mugabe is and was too old to rule a Country. Decision making and so many other things were and aren’t fully down to him ( not factual). Secondly if Emmerson Mnangagwa becomes president he will not have full support of regional powers who have their eyes on the whole predicament in Zimbabwe Supporting Robert Mugabe what does this mean? This generally means Emerson mnangagwa cannot make non precautious decisions in ruling the new Zimbabwe, because regional forces will most definitely hold him accountable and deal with ( in the case of him not letting go of power and misruling the country And ignoring people’s woes). they might be the same devil but one of them is a devil who’s going to be forced to deliver goodness fairness and progress to the people of Zimbabwe.

Or maybe Ignore everything and just rule without caring. Which is a doubt because of the factor above.

Brighter note. Emmerson Mnangagwa might not be anything close to mugabe. His pursuit to power by plucking out bad elements could also be predicted as a way to pave way to a productive non or less corrupt government which will or try to improve the livelihoods of zimbabweans and restructure and progress Zimbabwe as a country. In turn redeeming the pride of Zanu PF which he holds of high regard.

Disclaimer. This is an analytical assessment of the situation in Zimbabwe by a student Political anaylist in a Democratic country. The facts stated and predicted are all nothing but predictions.