Johannesburg - Like many other Zimbabweans who found freedom and work in neighbouring South Africa during Robert Mugabe's oppressive rule, dissident Muchaneta Chijakara was overjoyed to see the veteran leader ousted. 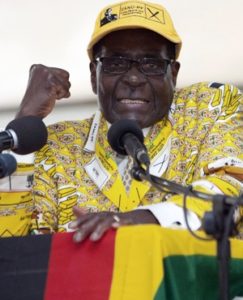 Now, the dream of returning home to her husband and five children seems almost within reach.

“I was… dancing in my house yesterday, it’s like Christmas, it’s like New Year,” the 43-year-old said.

Chijakara, a supporter of the opposition Movement for Democratic Change (MDC), left Zimbabwe in 2003.

At the time, a government crackdown on her party was in full swing.

“Next year, I’m going back home, if the industries are open… I’m not afraid of my country any more,” she said.

The majority of Zimbabweans had only known life under Mugabe – the world’s oldest head of state – under a rule defined by brutality, rigged elections, joblessness and international isolation.

His successor Emmerson Mnangagwa – known as “The Crocodile” for his ruthlessness – has promised “jobs, jobs, jobs!”.

It will take many of the up to three million Zimbabweans who made South Africa their home some time before they feel ready to return.

“I’m planning to go back to Zimbabwe, as soon as I get money,” said Enock Makuvire, a 28-year-old living in Johannesburg.

“As soon as I get money, obviously, I’m going to go back,” he said, adding: “It wasn’t by choice that I left Zimbabwe.”

Asked whether he believed Mnangagwa, once one of Mugabe’s closest allies, would do a better job at running the country, Makuvire said he was “confident” things would improve.

“We are not saying that everything is going to change overnight. But there is the beginning of hope.”

Ashley Shanx, a 31-year-old building painter who came to South Africa desperate for work in 2015, said he wanted to make sure the economy improves at home before he packs his bags.

“Investors must come to Zimbabwe first,” Shanx said, adding that until he can sense palpable change, he will stay put.

“Mugabe has left. We can’t wait to go back to our homes, but that’s not going to be now.”

Standing on the pavement in a busy Johannesburg neighbourhood, he and a group of Zimbabwean friends – also daily wage workers – chat, sip beers and listen to music as they wait to be recruited for the day.

With unemployment now soaring at 27 percent in South Africa, daily work has become hard to come by here too.

Many of those living in South Africa were once teachers, bankers and merchants, explained Shanx, himself a political science graduate.

But here, Zimbabweans must often settle for menial jobs, and have even suffered several waves of deadly anti-immigrant violence in recent years.

This month, Shanx has only worked 10 days. Still, he is probably better off in South Africa, with unemployment at home soaring at over 90 percent.

To kill time as they wait for work, Shanx and his friends dance to a song by Zimbabwean singer Jah Prayzah.

“You rule with an iron fist,” goes one of the songs, as Shanx explains that the lyrics are about “the injustices that the people suffered under president Robert Mugabe‘s autocratic regime”.

In Randburg, a well-to-do neighbourhood in northern Johannesburg, a group of mainly white Zimbabweans gather for a drink at the Sundowner bar.

Mike Odendaal, who used to own four farms in Zimbabwe before Mugabe’s regime seized white landowners’ farms in a policy that plunged the economy into misery, was pushed out of his land in 2010.

He has since set up a transport company in South Africa, where he plans on remaining for the rest of his days.

“I’m 64, for me to start again… I think it would be too much. I’ll go invest there, but I wouldn’t go back to live there,” Odendaal said.

Bernard Psawarayi, a 42-year-old black Zimbabwean who is also a regular at the Sundowner, has spent the past year trying to convince fellow members of the diaspora to invest in the country.

Now that Mugabe has fallen, he says that even those who do not plan to return have something they can offer.

“Even if everybody does not come back home, people are still committed to the country,” he said.