But, while Ian Smith was deluded about white rule persisting, Robert Mugabe knows where his power lies, writes Bryan Rostron 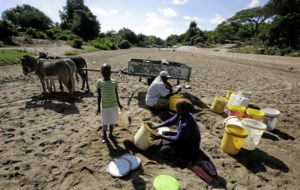 Villagers dig for water in a river bed near drought-hit Masvingo in southeastern Zimbabwe. Picture: REUTERS

At home I have a 100-billion Zimbabwean dollar note pinned to the fridge. Rather like the insanely hyperinflated mark during the Weimar Republic, this pastel blue banknote would never have bought much, even when printed nearly a decade ago. But on a trip to Harare earlier in 2017, those billions wouldn’t have been acceptable currency at all.

President Robert Mugabe had landed moments before us at Harare airport, which was renamed after him last week. As we were driven into town, there was little traffic on the road: mostly fume-belching cattle trucks packed with youths waving the Zimbabwean flag.

“They’ve been to welcome the president back after his medical treatment in Singapore,” remarked our taxi driver drily. “Those trucks drive around and pick up unemployed young men and women. They don’t have a lot of choice.”

When we reached the city centre, it was dark. Few street lights worked. On the pavement, the mass of street stalls selling fruit and vegetables were packing up and hundreds of young men milled about in the gloom, hoping to earn a few coins in return for helping to load unsold produce.

It is widely agreed that unemployment runs at about 90%. Nearly everyone we spoke to had relatives who had left for SA in search of work. No one knows the exact figure, but estimates vary between 1-million and more than 3-million Zimbabwean economic refugees here.

The last time I’d crossed the Limpopo River was 49 years ago and the country was still called Rhodesia. As a student I had hitchhiked there and for a few days was put up by the parents of a friend. This was not long after Ian Smith had crowed: “White rule will last for a thousand years.”

One lunch time I asked my hosts, “You don’t really believe that, do you?”

A heated argument ensued, concluded by their “house boy” being summoned and instructed to “tell the young master whether you would prefer a white or a black government”.

Oh white, he assured us. Later, when I was reading outside, he tip-toed up behind me and whispered, “So sorry … but what could I say?”

Delusion, it seems, still reigns. At 93, Mugabe has no intention of stepping down. There’s no one worthy of taking over, he regularly declares, though now he seems to have cleared the way for his imperious wife, Grace. He falls asleep during rallies, but every so often, vanishes for mysterious medical treatment in Singapore and returns, seemingly rejuvenated.

One morning I was driven past Mugabe’s stately official residence. Opposite are the barracks of the troops that used to be known as the Fifth Brigade, trained by the North Koreans and mostly famous for massacring up to 20,000 Ndebele in the early 1980s.

The day before, we had driven about two hours out of the city to the rural area of Marondera. Once beyond Harare, every 10km or so, we passed police road blocks, consisting of tin drums across the highway.

The traffic police stopped all the crowded taxis and “fined” them. The taxi driver would be issued with a receipt so that he wouldn’t have to cough up any further “fines” that day. It’s the way, said our driver, that the underpaid traffic police fund themselves.

The Marondera area was pretty and peaceful, with shoulder-high khaki grass, dotted with traditional villages. The next day an opposition newspaper revealed that more mass graves had just been discovered in Marondera.

It estimated that 200 people from opposition parties had been killed there during the 2008 election, and as many as 200,000 displaced by Mugabe’s vigilantes.

A friend of mine, now dead, was Mugabe’s first chief economic adviser. He told me that early on he had taken a plan to the president that would have created a country-wide network of trusts so that each village could decide how best to spend the treasury allocation for its own local needs.

“This is brilliant,” said Mugabe. “It really puts power back in the hands of the people.” He paused and beamed. “But why on earth would I do that … give away control over the purse strings? Now people have to come to me and beg for money. That’s my power!”

Today, the main currency in Zimbabwe is the US dollar. You can get by with rand too, but don’t bother with the Zimbabwean dollar: most of those soiled local banknotes are torn and unwanted, even if claiming to be worth billions.

• Rostron is a journalist and author.