Johannesburg - Zimbabwean President Emmerson Mnangagwa has been in office for less than a week, and online publications are already reporting on a "controversial" chrome deal he apparently helped facilitate with South African businessman Zunaid Moti. 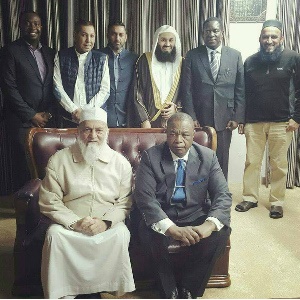 Africa Chrome Fields (ACF) has invested in a large chrome mining and smelting project in Zimbabwe which, according to Zimbabwean media, was facilitated by Mnangagwa while he was the country’s deputy president.

Moti is a business tycoon who is no stranger to controversy.

In August, The Times reported that he was listed by Interpol as an international fugitive after he and three other businessmen were accused of defrauding an allegedly disgruntled business partner out of R6.6m in an apparent bogus mining deal which allegedly took place in Lebanon in 2013.

Moti, his father Abbas Aboo Baker Moti, Ashruf Kaka and Sallim Bobat challenged their original arrest warrants in Lebanese courts and made submissions to Interpol in France to have the red notices overturned.

Moti is also known for his fast cars and quick property deals, including the controversial transfer of 33 tracts of prime land owned by the City of Johannesburg a few years ago.

Allegations that Mnangagwa paved the way for the business for his own gain were made in an article titled “Did Mnangagwa mortgage Zimbabwe to Muslim businessmen for political gain?”

The article was published on a site called PaZimbabwe, – which describes itself as “vision driven leaders in investigative reporting, unbiased and enlightening Zimbabwe news” – and it contains a number of stories on Zimbabwean politics. There is no indication who is behind the site.

The article suggests that Mnangagwa’s rise to power in the past month was financed by “Muslim investors with interests in Zimbabwe”.

They then specifically name Moti.

The story claims that, in 2014, the Zimbabwe Defence Force entered a joint venture with African Chrome Fields, which was mining chrome deposits in Central Zimbabwe.

The story said that former higher education minister Jonathan Moyo, who appears to have fled the country after the fall of Robert Mugabe, had earlier this year accused Mnangagwa of deceiving cabinet into lifting an export ban on raw chrome in 2015.

He claimed that tons of chrome “were smuggled out of the country, with Mnangagwa’s business partners making $49m”.

This was not the first time these claims were made.

In August, The Independent in Zimbabwe reported that Mnangagwa was involved in a multi-million-dollar chrome deal, “involving dodgy South African investors illegally granted permission to import fuel duty-free under the guise they are running a project with national status”.

The story indicates that ACF was granted a duty-free fuel importation certificate by the Ministry of Transport, which was said to have raised eyebrows as only equipment for national projects – and not fuel – could be imported duty-free in Zimbabwe.

Mnangagwa’s dealings with the mining company were allegedly debated in a politburo meeting, with Moyo accusing Mnangagwa of deceiving the cabinet when he lifted the chrome export ban.

‘I’m proud to be associated with your country’

ACF director Ashruf Kaka was quoted, in other media reports, as saying that the company had been granted the certificate to import fuel because their mining sites were remote, had no electricity, and were dependent on diesel-generated power.

Kaka said they were in the business of mining and would leave politics to the politicians.

After Mnangagwa was announced as president of Zimbabwe, ACF released a video of Moti congratulating him.

The video showed Mnangagwa’s previous visits to the mine, arriving in a helicopter and giving speeches.

In the video, Moti – who is ACF’s executive chairperson – addresses “our honourable president”, saying it had been an “absolute privilege working in your country with you”.

“I remember the day we met in Kwekwe and the insight and vision you had given and shared with me and the advice, and today is such an important day as it marks the start of a new Zimbabwe,” Moti said.

“The message I have for you is to remain the father as well as the gentle man that you are and who I have come to know over the last 1 000 days plus.

“If you are able to make a difference in other people’s lives as you have come to make in African Chrome Fields and myself, all I can say to the world is that Zimbabwe under your leadership will be a completely different Zimbabwe, and I’m proud to be associated with your country and I’m so happy to be here today.”

Moti then congratulates Mnangagwa, offering him best wishes as he starts on a path to bring economic prosperity to Zimbabwe.

‘We are not playing politics’

News24 heard separate reports that, when Mnangagwa was in South Africa, he was sponsored by Moti and stayed in an apartment at the Michelangelo Hotel in Sandton as his guest.

But Moti has denied this.

He said his company was apolitical and not affiliated to any parties.

“We are not playing politics. We are a business,” he said.

Moti said they had had no interaction with Mnangagwa when he was in South Africa and did not “look after him”.

“Those reports are rubbish,” he said. “We are trying to establish who wrote that story, but [we] are struggling (PaZimbabwe). It’s not mainstream media and it seems to have originated in the UK.

“There have been a lot of strange reports in Zimbabwe in the last few weeks. There was even one story that claimed Mugabe’s son had been poisoned?”

Moti said his only connection to Mnangagwa was through their business dealings in Zimbabwe.