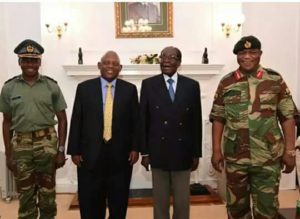 General Chiwenga – The Commander of the Coup that is not a Coup
Robert Mugabe – The President who is not a President
Father Mukonori –  Mugabe’s priest
Bongani Bongo – South African and SADC representative
The assembled cast is gathered in Zimbabwe’s State House to discuss important matters.
BONGO – ‘So Bob are you happy to resign?”
MUGABE – “ I am not happy.”
CHIWENGA – “ But I have tanks and guns!”
MUGABE – “ I am a democratically elected leader “
CHIWENGA – “Bob, you forget, we are the ones who rigged your elections.”
MUGABE – “ Oh shit.”
Awkward pause.
BONGI – “Maybe there’s another way – my boss took power by ambushing his predecessor at our annual party conference, no guns needed.”
CHIWENGA – “I like guns”
MUKONORI – “You should take confession”
CHIWENGA – I killed too many people in Matabeleland, it would take too long”
BONGI – “How interesting”
CHIWENGA – “Bob made me do it”
MUKONORI – I seem to remember him saying something like that – there have been so many confessions like that though”
BONGI – So will you resign Bob?
MUGABE – “No! My wife has expensive habits, I can’t resign!”
BONGI – “But you have all that diamond money!”
MUGABE (to CHIWENGA)  – “I thought you stole it.”
CHIWENGA (to MUGABE) – “No, I thought you stole it.”
Awkward pause…. then a slow realization.
MUGABE and CHIWENGA together – “The bloody Chinese!”
BONGI – Eish, the Chinese!
Everybody is silent for a moment.
BONGI – “So Bob will you resign?”
MUGABE – “No! I want to be able to make long speeches at the UN !”
CHIWENGA – You could still have a twitter account like Trump..”
MUKONORI – “Has Trump taken confession?”
CHIWENGA – “I think he takes Cofvefe “
MUGABE – “What is Cofvefe?”
BONGI – “I think it’s like viagra.”
MUGABE – “Viagra doesn’t work!!!”
Awkward pause.
MUGABE – “Which one of you bastards fathered Grace’s children?”
CHIWENGA – “No boss, you forget, we killed Pamire and ..”
Mugabe jumps to his feet
MUGABE – “you said Boss! You said Boss!”
CHIWENGA – “Ah shit, old habits die hard”
MUGABE – He said Boss! I’m President again.”
CHIWENGA – “Shutup old man! How many tanks have you got? How many guns have you got?”
Mugabe sits down.
BONGI – “Its going to be long night”
Meanwhile, outside State House, two pedestrians are walking home. Struggling to find their way through the raw sewage, junk and trash on the streets and in near darkness because none of the streetlights work.
PEDESTRIAN 1 – “Hey, did you hear that the South Africans and SADC people are here to help Mugabe negotiate an exit plan”
PEDESTRIAN 2 – “ Ha! where were they when we needed them in 2008?”
PEDESTRIAN 1 – “Ja, did you hear what SADC stands for?”
PEDESTRIAN 2 – “What?”
PEDESTRIAN 1 – “Southern African Dictators Club!”
But there is no reply because PEDESTRIAN 2 has fallen to an untimely death in a massive pothole.