Head of state, who sacked his vice president last week in apparent attempt to give power to his wife, meets senior military officers after a day of house arrest

It seems likely that the ruthless rule of the world’s oldest leader will be over within days, after the military declared on national television in the early hours of Wednesday morning that it had temporarily taken control of the country to “target criminals” around him. 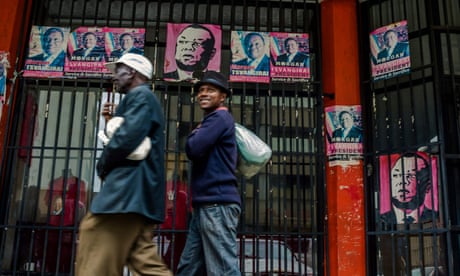 ‘Like a dream’: Harare wakes up to new era after a very low-key coup

The Zimbabwean capital remained tense but calm despite the political uncertainty. Troops have secured the airport, government offices, parliament and other key sites. The rest of the country was also peaceful.

The takeover by the armed forces appears to have resolved a bitter battle to succeed Mugabe, which had pitted his wife Grace against the former vice-president, Emmerson Mnangagwa.

Mnangagwa was reported to have returned to Zimbabwe on Tuesday evening from South Africa, where he fled last week after being stripped of his office by Mugabe in an apparent attempt to clear Grace Mugabe’s path to power.

Reports that Grace Mugabe had fled to Namibia on Wednesday appeared false, with several sources saying she was detained with her husband in their residence in Harare..

The future of the first lady is a key element in the ongoing discussions between Mugabe and the military. Singapore and Malaysia, where the Mugabes own property, are potential destinations if she is allowed to travel into exile.

Forty-eight hours of drama and confusion had begun on Monday when the army chief – flanked by other senior officers – warned he was prepared to “step in” to end turmoil in the ruling Zanu-PF party.

By Wednesday, it was “game over” for Mugabe, as Piers Pigou, a South Africa-based analyst for the International Crisis Group put it. “It’s just a question of how soft the landing is …. But the [army] still need him to provide a veneer of legitimacy and constitutionalism. If he doesn’t want to play ball that is a bit of a problem.”

The 93-year-old has ruled over Zimbabwe like a medieval monarch, favouring loyal followers with gifts of land, office and money, but pursuing those seen as traitors with a cruelty only marginally moderated by a residual respect for legal process.

A former guerrilla leader, Mugabe was ready to sacrifice his country’s economy to maintain his grip on power, turning to increasingly tired revolutionary rhetoric, corruption and coercion to stave off any threats. Few other than the close associates who benefited directly from Mugabe’s rule will mourn his passing from power. 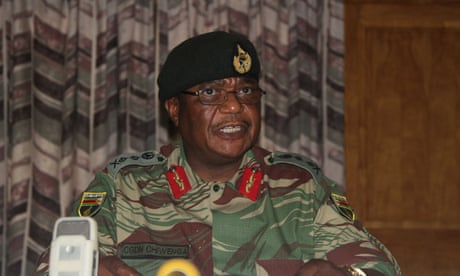 What’s your reaction to the Zimbabwe crisis?

One high-profile opposition leader said there was “a lot of talking going on”, with the army “reaching out to different factions to discuss the formation of a transitional government.

Negotiations had been ongoing for several months with “certain people within the army”, a second senior opposition official said.

The official said Mugabe would resign this week and be replaced by Mnangagwa, with opposition leaders taking posts as vice-president and prime minister. There was no independent confirmation of his claim.

Zimbabwe’s fragmented opposition has not publicly condemned the military move. Nelson Chamisa, the deputy head of the opposition MDC party, called for “peace, constitutionalism, democratisation, the rule of law and the sanctity of human life”.

Tendai Biti, an opposition leader, called for a “roadmap back to legitimacy”.

South Africa appeared to be backing the takeover and sent ministers to Harare on Wednesday morning. According to reports, the envoys were initially turned back at the airport by senior soldiers who told them that “Zimbabwe could sort out its own problems.” South African state TV later said that they were eventually allowed through.

Earlier in the day, the South African president Jacob Zuma said in a statement that he had spoken to Mugabe, who told him he was “confined” but “fine”. Zuma called for calm and a transition in line with the Zimbabwean constitution.

Boris Johnson, the UK’s foreign secretary, told parliament that the UK wanted to see “proper, free and fair elections” in the former British colony. Presidential polls are due to be held next year but may well now be brought forward.

“Nobody wants simply to see the transition from one unelected tyrant to a next. No one wants to see that,” Johnson said.

The African Union called for the “constitutional order to be restored immediately and … all stakeholders to show responsibility and restraint”.

A coalition of churches issued a statement explaining that “the current crisis is an opportunity for the birth of a new nation” and calling for the formation of a transitional government of national unity as soon as possible.

The Zimbabwean military have insisted – despite appearances – that a coup had not taken place.

A military spokesman, Maj Gen SB Moyo, pledged that “as soon as [the armed forces] are done the situation will come to normalcy” during an announcement of the military intervention on state television early on Wednesday.

Many blame him for the economic chaos and political repression, but the truth of his descent from freedom fighter to dictator is not quite so black and white

There has been no sign of any resistance to the takeover or to the arrest of a series of senior officials associated with Grace Mugabe and her G40 faction. The youth wing of the ruling Zanu-PF, which had made defiant statements directed at the military earlier in the week, appeared to condone the military action.

Late on Wednesday, the Zimbabwe Broadcasting Corporation interrupted its programming to broadcast a statement by the party’s youth leader, Kudzai Chipanga, who apologised for “denigrating” military chiefs.

Chipanga, who on Tuesday said he and his followers would be “prepared to die” for Mugabe, had been a strong supporter of the president and his wife.

But Grace Mugabe is deeply unpopular and has few allies internally or, crucially, regionally.

In contrast, Mnangagwa, a former spy chief, has strong support among many in Zimbabwe’s armed forces, and it is unclear who might oppose him in coming days.

Evan Mawarire, a pastor and one of Zimbabwe’s best-known activists, called on Zimbabweans to “remain calm and hopeful, alert but prayerful”. Mawarire, who has been jailed and prosecuted since launching the #thisflag movement last year, which led to huge protests, said developments were “the culmination of the work that citizens have been doing”.

Mugabe’s sacking of Mnangagwa came as a shock to many observers. Nicknamed “the crocodile” from his time fighting in the country’s liberation wars, he had been considered the most likely candidate to succeed Mugabe if the president decided to step down or died in office.

But the increasingly infirm president’s gamble exposed deep factional divides within the ranks of Zanu-PF as well as the political weakness of his wife and her faction.

“It was a spectacular miscalculation,” said Pigou.

Mugabe has systematically dismissed veterans of the liberation struggle from party posts in recent years, leaving the top echelons stacked with officials who did not fight in the independence war. This exacerbated a long-running battle between an old political elite forged in the 1970s and 1980s, and a new generation that coalesced around Grace Mugabe.

After Mugabe’s detention, we’re hoping Zimbabwe’s democracy has been saved

War veterans broke ranks with the president in 2016 and have vowed to form a broad front with the opposition to challenge his rule.

Chris Mutsvangwa, the head of the war veterans’ group, issued a statement from Johannesburg on Wednesday praising the military for carrying out “a bloodless correction of gross abuse of power” that would return Zimbabwe to “genuine democracy”.

Many of the first lady’s supporters believed that Mugabe would name his wife as his successor at the Zanu-PF annual conference in December.

Grace Mugabe’s reputation has been tarnished by a series of violent outbursts, including an alleged assault against a model she had found with her sons in a luxury apartment in Johannesburg in September. Granted diplomatic immunityafter the incident, she was allowed to leave South Africa despite a police inquiry, and denies any wrongdoing.

Reports of extravagant purchases, including property in South Africa and a Rolls-Royce, have also angered many Zimbabweans.

The crisis comes at a time when Zimbabwe faces severe economic problems. The country is struggling to pay for imports due to a shortage of dollars, which has also caused acute cash shortages.

State employees, including some soldiers and policemen, have gone for months without payment of their salaries, deepening discontent with the government.

Zimbabwe timeline: the week that led to Mugabe’s detention

Robert Mugabe fires his powerful vice-president, Emmerson Mnangagwa, clearing the way for his wife, Grace, to succeed him as leader of Zimbabwe.

Grace had accused 75-year-old Mnangagwa, a former intelligence chief, of being the “root cause of factionalism” in the ruling Zanu-PF party.

Mnangagwa reportedly flees to South Africa, but vows to return to Zimbabwe to lead party members.

The party “is not personal property for you and your wife to do as you please,” Mnangagwa tells Mugabe in an angry five-page statement.

Zimbabwe’s army chief demands a halt to the purge in Zanu-PF, and warns that the military could intervene.

“We must remind those behind the current treacherous shenanigans that when it comes to matters of protecting our revolution, the military will not hesitate to step in,” General Constantino Chiwenga told a media conference attended by about 90 senior army officers.

A convoy of tanks is seen moving on the outskirts of the Zimbabwean capital but the military denies a coup. In an overnight declaration on state television, they say Mugabe is safe and they are “only targeting criminals around him”.

Military vehicles take control of the streets of Harare in the early hours. South Africa says Mugabe has told its president, Jacob Zuma, by telephone that he is under house arrest but is “fine”.