Now the dust is settling, and there wasn't so much of it, the long-suppressed voice of the people needs to be heard. 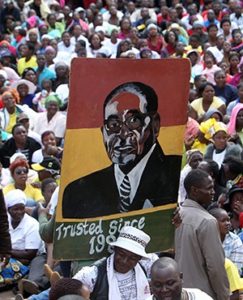 Thousands of Mugabe supporters carry his portrait while gathering at the party headquarters in Harare. (Tsvangirayi Mukwazhi, AP)

The christian churches, with unusual speed and remarkable unanimity, have made a statement that few of their followers can disagree with. They call for calm, for caution about accepting rumours – and that is more important now that anyone can say the first thing that comes into their minds on the social media – and for all sections of society to be involved in discussing where we go from here.

A vast majority probably would ask for what we thought we were cheering for on 18 April 1980, when the Rhodies had admitted defeat, our new Prime Minister accepted the symbolic handing over of power by Prince Charles, representing those British who are so loved and so hated by Mugabe and Bob Marley sang to inspire us for the future.

We want now, as we did then, a free Zimbabwe in which we are all free to choose our own government, and in which we all respect each other, regardless of race, gender, religion, level of education, age or any of the other labels that have been used by oppressors over the ages to divide and rule.

We all mourn for those who died in a war to achieve those aims and those who continued that struggle by their critical voices. In spite of their efforts we saw, some of us faster than others, the ideals fading and our liberators slipping off the pedestals we had put them on. I admit I wasn’t the quickest to open my eyes, but I wasn’t the slowest.

How many of us listened to those early warnings? I remember a gathering of mostly development workers in the late 1980s where some criticism was expressed. Many agreed there was something wrong but only said “Surely HE doesn’t know?” A woman from Nicaragua, another country that was liberated in 1979-80 from a long-standing tyranny, said “Why don’t you tell him? That is what we would do.” There was a polite, shocked silence as if she had said something very rude.

We feared then to speak our doubts and called our fear “respect”. We have a new chance to say we respect and honour the ideals for which so many died. This time we have learned from our mistakes. We have learned that no leader deserves any more respect than he or she earns by adhering to and promoting those ideals. Those ideals are not the property of one party, class, tribe or race, to be locked away in some shrine and invoked only as slogans to boost somebody’s power and ambition.

That doesn’t mean we should start shouting to pull anybody down. If they have really committed crimes, we still have law courts that have not lost all sense of justice. Those courts will be strengthened if we speak without fear but without hatred or anger, speak from our experience, many of us from our hurts and – this is the most important – listen to each other. That is the way to deal with past abuses and mistakes. It is also the best way to prepare a better future.

Shouting slogans only sharpens divisions. It tells us who the enemy are. Negotiating with the other guy requires more skill, courage and perseverance, but it can build instead of destroying. How did Botswana grow rich fro

m finding diamonds while Zimbabwe’s diamonds only leave behind more poverty and suffering?

We have a new chance. We must not let future generations say that all those who died, in battle, in prison, in the streets or in their own homes, in hope or in despair, have died in vain.