That Robert Mugabe divides opinion is not contestable. Whatever views anyone possesses about him, what can never be taken away from Mugabe are his liberation and dictatorship credentials. 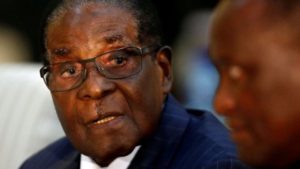 The past 10 days saw Zimbabwe lurching from one monumental event to another, inscribing an indelible mark on Mugabe and what he represents.

Most importantly, in these 10 days, many drastic political developments took place in ZANU-PF which shall forever remain hallmark features in the sand of Zimbabwe. It can, in fact, be ranked as some of the most intense days Zimbabwe has seen since the attainment of independence in 1980.

Summarily these are the developments:

Even though it had become the norm for Robert Mugabe’s motor mouth wife, Grace, to publicly attack former Vice President Emmerson Mnangagwa during youth interface rallies, Mugabe was always sly and subtle. He never directly attacked Mnangagwa but at the Bulawayo Youth interface rally, the visibly angry Mugabe lampooned his deputy in front of a cheering crowd. That was a clear sign that the chickens were on their way home to roost.

That Grace Mugabe seems to suffer from the twin qualities of mental constipation and verbal diarrhoea is incontestable but when she addressed members of the apostolic sects at the National Sports Stadium she certainly took it up a notch. She ruthlessly lambasted Mnangagwa, then still vice president, for being divisive and insubordinate to her husband, promising that he would be fired by her husband.

The writing was already on the wall and Mnangagwa’s fall was now only a matter of time after a weekend of heavy clobbering by Mugabe and his wife. Most people, including myself, had projected that Mnangagwa would be fired at ZANU-PF’s extraordinary congress in December but it happened earlier. On the 6th of November he was fired by Mugabe from his position as the vice president of Zimbabwe.

It has always been an open secret that Grace wanted Mnangagwa’s position. That is why she fought spiritedly to have him expelled. As soon as Mnangagwa was ousted, ZANU-PF structures (mainly the youth wing) organised a solidarity rally at the party’s headquarters where they endorsed Grace as their preferred candidate to be elected to the vice presidency at their extraordinary congress in December.

While all this was happening, it was alleged that Mnangagwa fled the country into self-imposed exile. There were several theories proffered regarding how he fled and where he went. The predominant theory was that he went into Mozambique, then travelled to South Africa and eventually to China. It remains a mystery whether he indeed fled the country, and how and where he went.

War veterans leader Chris Mutsvangwa announced during a press conference that they had fired  Mugabe from the original ZANU-PF. The liberation war fighters accused Mugabe of departing from the founding principles of the party and allowing his wife, together with other young Turks, to disregard the tenets of the revolutionary party.

In the middle of all this hullabaloo, Mugabe’s lapdogs saw it befitting to rename the Harare International Airport to Robert Gabriel Mugabe International Airport. The official ceremony took place on the 9th of November at the airport. Most Zimbabweans expressed their disgust over the renaming of the airport. Meanwhile, as all this was happening, the commander of Zimbabwe’s Defence Forces was in China.

For the first time in Zimbabwe the Commander of the Defence Forces, General Constantine Chiwenga issued an explosive statement regarding the state of affairs in the nation and in ZANU-PF.

In his statement, he clearly ordered Mugabe and his G40 acolytes to stop purges which were targeted at liberation fighters within the party. Chiwenga did not mince his words and told Mugabe that failure to adhere to his directive would lead to the defence forces “stepping in”. It was a monumental first.

ZANU-PF’s youth wing leader Kudzai Chipanga addressed a press conference responding to Chiwenga’s statement. Chipanga vowed to die defending Mugabe. He told the general not to meddle in party affairs, stating that Zimbabwean youths were prepared to resist the military.

On the 14th of November, social media was abuzz with stories about unusual military movements in some parts of the country. A lot of narratives and images of this circulated on social media, some of which overstated the situation.

By midnight, the military had taken over key state institutions such all state broadcasting channels. During the early hours of the 15th, the first announcement regarding the “stepping in” of the defence forces was made on national television. It became clear that the military had taken over the running of the country. They effected what is being widely regarded as a soft coup.

That Mugabe was viewed as a god by some is not an exaggeration. In fact, even his wife declared at some point that he would rule from his grave. Many of his supporters viewed him as invincible and untouchable. It really seems as though Mugabe and his supporters forgot that everything that has a beginning has an end. They forgot that whenever the sun rises, it sets at some point.

Without any doubt, this is Mugabe and probably the original ZANU-PF’s sunset. The era has come to an end.

2. It’s not dawn yet for Zimbabwe

The situation in Zimbabwe has divided opinions and reactions among Zimbabweans. Most people are generally happy that they are experiencing some sort of change at least, whereas some are taking the developments with a pinch of salt.

I will be lying if I am to categorically state that I know what is going to happen from here. What is crystal clear is that this is a new ball game and we have entered a night season. This is not going to be stroll in the park. A lot of our norms and routines are going to be disrupted under this new order.

Indeed, it may be a necessary ‘evil’ or discomfort, one which will eventually usher us into the better Zimbabwe we all yearn for.

What is happening in Zimbabwe right now is not the end. We have not arrived yet. If managed well, this could be the baby steps towards the end. In essence, this phase is supposed to be, or is going to be, a transition under the hegemony of the defence forces.

At some point, civilian rule will have to be effected. It is my ardent hope that in the not too distant future the defence forces will preside over a democratic process towards the restoration of civilian rule in Zimbabwe.

In order to project the future with some degree of accuracy it is pertinent to underscore what precipitated the current state of affairs.

First and foremost, Mnangagwa’s solid relationship with the securocrats must never be underestimated. The war veterans and the majority of securocrats wanted Mnangagwa to succeed Mugabe. When Mugabe fired Mnangagwa, it was a declaration of war.

Not only that, the intervention was also triggered because Mugabe had gone for broke and wanted to fire the generals for political expedience after the press statement by Chiwenga. He did a pre-emptive strike.

As far as what is going to happen from here in Zimbabwe, Mnangagwa and Chiwenga are going to be key influencers. They will shape the trajectory of Zimbabwe’s future.

Mnangagwa is likely going to take over as interim president and give a lot of democratic assurances. SADC and the AU are obviously relieved to see Mugabe go and likely not going to intervene.

Emmerson Mnangagwa is not a saint. He helped to build the monster called ZANU-PF. His name is attached to a number of evil deeds.

However, Mnangagwa has long shown he is open to reform. Another Government of National Unity (GNU) is the most likely outcome with support from Western capital. The economy is likely to improve. The generals would also want guaranteed immunity so they will quickly return civilian control although they will tightly monitor the situation.

Even the opposition is likely going to accept a GNU with Mnangagwa as president and pave the way for democratic elections.

Patson Dzamara is a leadership coach, author and political analyst based in Zimbabwe.