As I gaze into the tea leaves at the bottom of my first post-Mugabe cup of tea, I try to divine the future of our nation, Zimbabwe. Last night was sheer euphoria here on the streets of Bulawayo, and of course throughout the nation, as spontaneous crowds gathered to dance and cheer the dictator on his way. 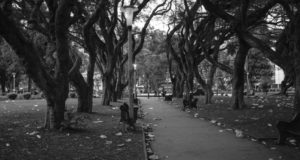 His resignation that we had all been expecting hourly for the previous week, had finally come late in the afternoon of 21 November, after impeachment proceedings had already begun in Parliament. Now, it is a bitter-sweet ‘morning after’, sipping the dregs of my Five Roses tea.  It has always been not just about Mugabe going, but what happens once he is gone. And what a crazy fortnight it has been, not just for Zimbabwe, but in terms of recent African history.

On Saturday, 18 November, I was very reluctant to take part in what I considered to be premature celebrations on the streets of urban cities around the country, in which civilians, seemingly all having simultaneously succumbed to Stockholm Syndrome, hugged soldiers and polished their boots in gratitude for the famous ‘not-a-coup’, that seemed poised to liberate us from our 93-year-old President – the world’s oldest-serving head of state. I felt deep concern that the military have been our oppressors for the last 37 years – particularly here in Matabeleland, where the Gukurahundi massacres of the 1980s, which left an estimated 20,000 civilians dead, were intended to destroy ZAPU, the then dominant opposition political party.  Since 2000, the military, under instruction from Mugabe and ZANU PF, have played a notorious role in ensuring that Mugabe remained in power for every one of the elections since then, most violently in 2008, when more than 200 opposition supporters died and tens of thousands of others were beaten and displaced by the various organs of ZANU PF, including the army. I could not imagine hugging a soldier and taking a ‘selfie’ next to tanks and military vehicles – it is my engrained experience that since 1980 – when they did indeed liberate the citizenry from colonial rule – the army have not been our friends and liberators. They have actively undermined our voting rights as citizens to ensure Mugabe has remained in power for every one of the last 37 years. Nor was the ‘not-a-coup’ intended to be about a return to rule of law (obviously, as the military intervention was itself a violation of the constitution), nor, I felt, was it to promote the rights of citizens in general, even though our economic and social rights were being placed at the forefront by the army. This was simply ZANU PF settling its own internal succession debate, finally driven to roping in its generals to get rid of “Gucci Grace” Mugabe, who had overreached herself in her greedy quest for the presidency.  She had orchestrated the unceremonious sacking a week previously, of Vice President Emmerson ‘the Crocodile’ Mnangagwa: he was accused of orchestrating the booing of Grace at a Bulawayo rally, and was dismissed on grounds of “disloyalty, disrespect, deceitfulness and unreliability”.

…. Which in turn had led to the astonishing ‘not-a-coup’, first hinted at on 13 November.

It was an unprecedented sight, to see Major General Constantino Chiwenga, Commander of the Armed Forces of Zimbabwe, surrounded by more than 70 senior military personnel, scowling and thundering that, “The current purging which is clearly targeting members of the party with a liberation background must stop forthwith.”

And more disbelief two days later, when at the peculiar hour of 0130 am, Major General Sibusiso Moyo of the Zimbabwe National Army announced that, “the situation in our country has moved to another level”. “We wish to make it abundantly clear that this is not a military takeover of Government,” continued the measured voice of Moyo, clad in unmistakeable camouflage uniform.

The soap opera continued – this has been a reality show at its extreme, with a bit-part for everyone. The stubborn old president clinging to power, the many Generals, a badly behaved first family, replete with Rolls Royces. And us, the populace, suddenly released by the repressive state onto the streets to sing and dance, now that it suited the military to reframe its not-a-coup in the eyes of the African Union, the Southern African Development Community and the world at large. And surely, this has been an astonishing coup – one in which life really has continued as normal and in which there has been little violence.

Did it make sense for us to help the army with this task? As a friend pointed out – this is an inter-departmental squabble over leadership, and as ZANU PF does not have a human resources department, they have called in the military. In the words of one tweet doing the rounds: “Don’t you love it when the guy who was keeping your dictator in power gets fired, so he uses the army to force [the dictator] to resign so he can take over?” Where do democratic forces fit in to all this?

In spite of all these misgivings, last night I did join the celebrations in central Bulawayo, where crowds of joyous people, mainly under the age of 37 years, leapt and sang with passion around the statue of Joshua Nkomo, the most revered politician in Matabeleland. What was striking was the complete absence of uniforms – no soldiers to kiss, no policemen keeping an eye on the crowds. Flags of all sizes waved, hooters blew, vuvuzelas blurted. Spontaneous groups formed and danced in unison as if rehearsed. Some families opened the boots of their cars, turned on music and had intimate celebratory parties on the verge of the bigger chaotic masses. It was indeed a momentous night, a rare moment when we, the citizens, were truly allowed freedom of speech, movement and association on the streets of our cities.

Reflecting on it this morning, I hope that my conservative misgivings have been wrong. I have seen touted on numerous websites and postings, the conviction that having let us, the citizenry, out of the box to suit their own cause, the military and our incoming president Emmerson Mnangagwa will now decide that it is okay to leave us out of the box. There have been calls that the role that all Zimbabweans have played, not just in the last week but over the last nearly four decades should be recognized in some kind of a government of national unity. It has been suggested that ZANU PF should consider placing two opposition war veterans as Vice Presidents, and recreating the post of Prime Minister for Morgan Tsvangirai, to show good faith to us all. Many are lobbying that such a government should last for some time, possibly years, to ensure the revision of laws that currently keep our civil liberties under lock and key, and keep the electoral playing field skewed in favour of any imcumbent party.

It is argued that the joy that has been unleashed and the taste of freedoms and the weird solidarity between military and ourselves that we have had this week, will make ZANU PF and the armed forces think twice before once more becoming our aggressors.

I stare into my tea-leaves, looking for guidance. I give the cup a swirl – yes that is definitely a little crocodile with open jaws, and I see three other blurry heads, two on one side and one on the other – could these be Joyce Mujuru and Dumiso Dabengwa as two Vice Presidents, and Morgan Tsvangirai as a Prime Minister? Yes! I think so. In my excitement I give the cup another swirl and see that crocodile has grown in size, and notice the other three are no longer there. Well, the next week or two will tell me which prediction via tea leaves was correct – is our incoming president going to prove to be more all-encompassing than the last? Is he going to acknowledge the role our buoyant citizenry has played in the events of the last week with our exuberant use of sudden freedoms on the streets? Or is ZANU PF going to revert to type, try and squash our genie back into the bottle, and rule for themselves alone?