LONDON - Britain on Wednesday expressed cautious optimism after the military took control of Zimbabwe, but warned against any transition "from one unelected tyrant to the next". 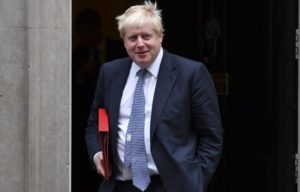 “The situation is still fluid, and we would urge restraint on all sides because we want to see and we would call for an avoidance of violence,” Prime Minister Theresa May told MPs.

Foreign Secretary Boris Johnson urged caution in predicting the future of President Robert Mugabe, who has ruled Zimbabwe since its independence from Britain in 1980.

“Hopes have been disappointed so many times. But there is hope, there is a real chance now that things will change in Zimbabwe,” he said.

“But it’s by no means a foregone conclusion. Everybody will have to work hard together to achieve that.

“Nobody wants simply to see the transition from one unelected tyrant to the next.

“We want to see proper free and fair elections next year and that’s what we will be working towards.”

May said her primary concern was for the safety of about 20,000 British nationals who live in Zimbabwe.

The government changed its travel advice on Wednesday, urging Britons in Harare “to remain safely at home or in their accommodation until the situation becomes clearer”.

Zimbabwe’s military is in control of the country and Mugabe, in a conversation reported by South African President Jacob Zuma, has said he is under house arrest.

But generals have denied staging a coup.

Johnson said he would be talking to the deputy president of South Africa later on Wednesday about the response of the international community.

He said he is also going to a European Union and African Union summit later this month, where Zimbabwe was now likely to be a priority.

“All Britain has ever wanted for Zimbabweans is to be able to decide their own future in free and fair elections,” he said.

“Mugabe’s consuming ambition was always to deny them this right.

“Britain has always wanted the Zimbabwean people to be masters of their fate and for any political change to be peaceful, lawful and constitutional.”

Mugabe was once heralded as a liberator who rid the former British colony Rhodesia of white minority rule, but was soon cast in the role of a despot who crushed political dissent and ruined the economy.