The situation in Zimbabwe is moving fast and I thought I would give you what my take is right now on Saturdaymorning before I go off to join the rest of Harare in the rain at a rally. 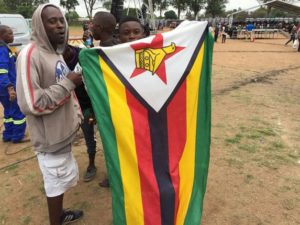 These rallies have now multiplied – there will be at least three in Harare and many in other Cities and across the world. They are being called to celebrate what has happened so far and Mugabe’s imminent departure and to put pressure on him and any friends he has left, in the form of a mass action.

On Tuesday night, the Army moved to take over control of all key points in the country and to take Mr. Mugabe and his close allies into custody. After a brief struggle the operation was completed before sunrise and an announcement was made over TV and Radio that the Army had taken over and that the President and his family were safe but under protective custody.

During Wednesday they picked up several other Mugabe allies and confirmed their hold on the country. The first reaction from the regional and international community came in – mostly mixed signals, not knowing what to make of the situation, jubilation and dancing on the streets – solid support for the Army.

Thursday talks began on the next step, with the Army and the Mnangagwa leaders insisting that Mr. Mugabe announce his retirement and that he was handing over to Mr. Mnangagwa as the “Interim” President. They know that this means that in 90 days the Zanu PF Party has to confirm him in that position. What was not visible was an equally swift and efficient takeover of all Zanu PF Party structures throughout the country.

South Africa tried to intervene on the side of Mr. Mugabe and called for a SADC Summit and an urgent meeting of the SADC Organ on Security. This tool place on Friday in Gaborone. An attempt was made to threaten the Army here with sanctions, but it was short lived – on this issue SADC is a divided house.

What confused people was the decision to “allow” Mr. Mugabe to meet the South African emissaries at State House with cameras present and then to allow him to take part in the Graduation ceremony on Friday at the Open University. But this is just play acting for the benefit of African leaders to whom the people in charge want to represent what is a coup as simply an attempt to restore sanity to national affairs and that they were doing their best to make it constitutional and legal with the minimum of force.

But behind closed doors, Mr. Mugabe could not accept what had happened and he argued that he was State President and that he would not resign until his term was completed in late 2018. This is not acceptable and when he would not budge and South Africa looked like it might intervene, the Army and the Mnangagwa group decided to use other means.

The Zanu PF Party structures at Provincial level were asked to meet and in hours the great majority had decided to resolve that Mr. Mugabe be recalled and replaced. In addition, the call went out to hold mass rallies to show popular support. These are under way.

What may happen next – unless Mr. Mugabe gives in and resigns, is that Parliament will be called to sit on Tuesday next week and start the process to have him dismissed from the Presidency and replaced.

This is the end of the Mugabe era in every way – new leadership will be in place next week and then Zimbabwe has to find its way back from the wilderness of isolation and failure which are Mugabe’s legacy.