ZIMBABWEAN authorities on Tuesday 14 November 2017 raided and seized some computers belonging to Magamba Network Trust, a social media outlet, in connection with the alleged commission of the offence of subverting constitutional government. 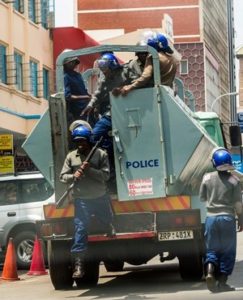 Detectives from the Zimbabwe Republic Police (ZRP)’s Criminal Investigations Department’s Law and Order Section based at Harare Central Police Station raided and confiscated some laptops, computers and printers belonging to Magamba TV at their offices in Harare on Tuesday afternoon.

The ZRP officers, who conducted the raid and seized Magamba Network Trust’s property, were armed with a search warrant, which was granted on Wednesday 08 November 2017 by Harare Magistrate Elisha Singano authorising the law enforcement agents to confiscate laptops, computers and printers belonging to Magamba Network Trust.

The ZRP officers claimed that the seizure of the Magamba Network Trust’s property was based on reasonable grounds that such devices were used or may afford evidence in the commission or suspected commission of the offence of subverting constitutional government as defined in section 22 (2) (a)(i) of the Criminal Law (Codification and Reform) Act, Chapter 9:23. Lawyers from Zimbabwe Lawyers for Human Rights who include Gift Mtisi, Roselyn Hanzi, Bryant Elliot and Bellinda Chinowawa were late on Tuesday working on instituting legal action to challenge the ZRP’s seizure of Magamba Network TV property.