Rail journalist John Batwell reviews this ‘see-saw’ system over the course of what has proved to be an eventful year: 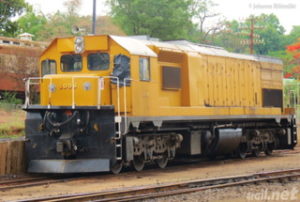 It finally looks, through recent events, like the country’s railway system is going to get to witness

parastatal’s assets in Bulawayo, Sawmills, Dete and Gweru to familiarise with the organisation as

the proposed recapitalisation programme gathered momentum. In Bulawayo there was a visit to

the large NRZ workshops; the trip up the North Line to Dete facilitated seeing the old CTC

infrastructure and the need for rehabilitation of this railway route. In Gweru, the visitors inspected

what lasts of the electrification infrastructure.

By early July only six bids had been unveiled. Of the six, only three appeared to have met the

tender requirements. The three were a Swiss firm, Crowe Horwath Chartered Accountants, which

which proposed to inject about $700 million; Transnet partnered with a local firm, Diaspora

Infrastructure Development Group, submitted a tender in which they said they could provide $400

million. China’s Sino Hydro only submitted what was referred to as a “regret”, while China Civil

Engineering asked for a late submission. The sixth firm, SMH Rail of Malaysia, said it could re-

manufacture some of the infrastructure with a funding proposal of about $101 million. Transnet

and Diaspora Infrastructure Development Group (DIDG) had been the successful bidder. DIDG is

Zimbabwean professionals mostly based in South Africa. Transnet is the technical partner. The

recapitalisation project will involve kick starting the rehabilitation and renewal of plant, equipment,

rolling stock, track, signalling and telecommunication infrastructure and the supporting

The deal, embracing Transnet and DIDG, was subsequently blocked by cabinet. Competing

waters. What appeared a simple and straightforward project became a chaotic and complicated

affair. The deal did appear sound and viable, although vested political and business interests in it

could not be ruled out. Some ministers were pushing for the involvement of China Railway Eryuan

Engineering Corporation (CREEC), which did not participate in the bidding process and Sinohydro,

which took part in the tender, but lost out. CREEC had signed an agreement with NRZ for railway

network planning and rehabilitation of four corridors, including the supply of traction and rolling

stock and other equipment in May 2015. Government needed to jump around to assess and

analyse the project and arrive at a professional decision, not influenced by factional politics,

personal squabbles or other self-seeking interests.

By mid-October, the deal with South Africa was back on track following Zimbabwean cabinet

approval – why the turnabout one might well ask?  The Chinese deal was more expensive and not

as comprehensive in its proposed conditions. CREEC’s proposal was silent on the source of funds

and therefore NRZ would have to apply for a loan from China Exim Bank. A 15% deposit would be

required for the loan to be accessed, meaning the broke government would have had to provide

US$125 million as a deposit for the US$836 million loan. According to reports, the China Exim

Bank closes its books of accounts for the year in November, meaning if it were to provide funding

for Zimbabwe, the processes would only start in 2018. Other Chinese financial institutions such as

reputation for delaying on payments. While the CREEC deal was more costly, its feasibility study

kms or 45% of the network. The DIDG/Transnet project covers the entire network of 2 760km and

all other aspects of railway operations. CREEC would only provide rolling stock (wagons and

telecommunications as well as Information Communication and Technology (ICTs).

Government ministers are therefore convinced that the financing model and project operation of DIDG-Transnet is more viable when compared to the CREEC one. The DIDG-Transnet proposal is a public-private partnership (PPP) arrangement with joint venture for operations and loan repayment and has a life of 25 years. DIDG-Transnet also complies with the country’s indigenisation policy. The Zimbabwean ownership of the deal is effectively 67% in the joint venture since DIDG and NRZ have 32% and 35% respectively. In the joint venture of NRZ and DIDG-Transnet, the parastatal has 35% while the consortium has 65%.

Development Corporation (SA) had put up funding letters worth $1,2 billion for the project, of

which $400m is earmarked for initial investment in capital expenditure. The US$400 million is not

going to be distributed in one big chunk. Spanning a three-year period, the first year there is to be

US$159 million that was to be spent on procurement of locomotives and rolling stock. NRZ was

talking of purchasing 24 mainline locomotives and 13 shunt locomotives. It is also looking at

about 1 000 brand new wagons that would come in the first year and the refurbishment of 700.

way and the removal of speed restriction sections. The signalling system is up for addressing too.

The second year would see another US$100 million going into fixing infrastructure, information

communication technology and further refurbishment of wagons and locomotives. While NRZ

and the hiring of motive power exercised, incurring further financial overheads. The rest of the

money is going towards refurbishing other infrastructure, such as buildings and workshops.

to 30 percent. In a statement at the time, the railway company said it would cut fares for the

Bulawayo station yard in June. The coaches were a source of shelter and a fire obviously got out of

control. The rolling stock was not in regular use but served as a source of spares.

In early July, it was reported that NRZ had secured a $5 million loan from a local bank to repair

wagons. Parliament was mulling the cancellation of the parastatal’s debt during the same month.

meet its 3,5 million tonnes target by the end of the year on anticipated improved performance of

Bulawayo Workshops open to others

outside commercial jobs. As a result of the initiative, NRZ Engineering Workshops have been

rebranded to Inter-Rail-Tech with the motto “Engineering Drive for Success”. The workshops are

provide a one-stop solution to the mining and engineering industries. Inter-Rail-Tech is primarily

Electrical and Structural. Inter-Rail-Tech services will be targeting mining, production,

manufacturing and agricultural sectors as well as individuals, as it believes no job is too small.

of the workshops. There is also a gap in the market for services offered by Inter-Rail-Tech as a

number of companies, which used to offer these services mostly in Bulawayo and the Midlands,

have closed down. Inter-Rail-Tech boasts of a wide range of industrial machinery and equipment

armatures; pressing machines, which can press up to 150 tonnes; a foundry; jackhammers for

Tech project seeks to adopt a Total Quality Management and is working towards ISO Certification.

African railway system, which is – and always will be – so vital a conduit within the SADC