Auxillia Mnangagwa who has made history by becoming the only politician in Zimbabwe to double as a First Lady and an MP will not relinquish the Chirumanzu-Zivagwe Constituency despite her tight schedule but will instead fight to retain the seat in next year’s general elections. This emerged during her first visit to the constituency as First Lady last Thursday. 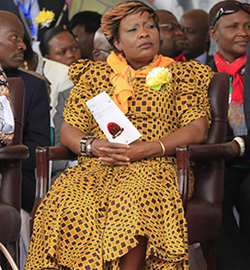 Mnangagwa is the country’s third First Lady after independence and the other two; the late Sally and Grace, both married to Robert Mugabe were never Members of Parliament although they held senior posts in Zanu PF.

Mnangagwa who was under siege from the Mugabes’ for most of 2017 told hordes of her supporters in the mining town of Mvuma that she will never abandon her constituency despite her husband’s elevation to the position of President. Even the persecution she suffered under the Mugabes would not push her out of the constituency, she said.

However senior Zanu PF politician Oppah Muchinguri-Kashiri suggested in an interview with The Standard at the weekend that Mnangagwa learns from Grace Mugabe’s mistakes and step down as an MP.

Mnangagwa who exuded extraordinary humility during the meeting in sharp contrast to her acerbic predecessor urged her supporters to separate her role as MP from her roles as First Lady.

“Please when I am here I am your MP and one of you. The only time that I become First Lady and mother of the nation is when I am away from this constituency. We have gone through difficulties but I will never abandon you.

“We are still together despite the changes that happened in the past few days. I am still your MP and I am still your mother. Please separate me from the President’s business. When I am here I am your MP and when I am out there I am the First Lady and mother to all,” said Mnangagwa.

Chirumhanzu-Zivagwe is a Constituency that Mnangagwa won in a by-election after her husband who was the MP was appointed Vice President in 2014.

Midlands ZANU PF provincial executive member Norest Msindo praised Mnangagwa for her humility despite that she is the First Lady. He also described her as a selfless woman.

“Despite her husband being Vice President for the past three years and now the President, Mai Mnangagwa continues to carry herself around in a manner that only servant leaders do,” said Musindo at the meeting.

Violet Juru, a secretary in the provincial women’s wing thanked Mnangagwa for empowering women in her constituency by starting income generating projects.

“She gave us sewing machines, road runner chickens and started a horticulture project for us. We thank her for the vehicle that she bought for us for our burial society,” said Juru.- Masvingo Mirror