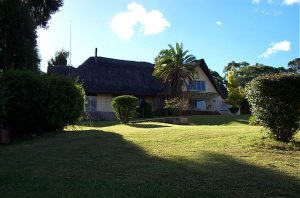 He has been battling for more than 10 years. He was forced to leave Zimbabwe after being kicked off his 61.8 acre plot in Harare’s Borrowdale suburb, which he bought in 1990 after it was advertised for sale in the Herald newspaper.  Before purchasing the property Rogers spoke to the Minister of Lands at the time, Kumbirai Kangai, who assured him that there would be no problem provided the land was being utilised, which it was. The property should also have been secure from the government seizures of farms and other land that began in 2000, because it was within a municipal boundary.

In 2003, Rogers moved off the property, in which he had invested thousands of dollars, after being warned that “someone in power” wanted it and was going to invade. The property was then rented out. In 2009 the property was invaded by Gift Misheck Mangwende, a man Rogers believed to be linked to Zanu (PF).

Rogers was forced to seek legal intervention and finally managed to secure a High Court order, ordering Mangwende to leave the property.  He eventually did so, but a significant amount of damage was left behind.

Rogers’ original tenant then moved back in, but a year later Mangwende invaded the property again. Another High Court order was secured ordering him to vacate the premises. But according to Rogers, Mangwende, with a gang of 150 youths, chased away the Sheriff of the Court and openly defied the Court order. They also tried to burn down the house on the property, but the farm workers managed to save it. Mangwende then also chased away the 60 workers (employed at the time growing produce to export to the UK) at gun point, threatening to shoot them if they did not leave. The Sheriff of the Court then came back with the riot squad and police and evicted the invaders, but they returned shortly afterwards with a Compulsory Land Order.

A notice of acquisition was published in the Government Gazette on June 29, 2012 in terms of section 8 of the land Acquisition act {chapter 21:10}. On August 3 an acquisition order was issued by the then Minister of Lands Hebert Murerwa. The beneficiary was named as the original land invader, Mangwende, who then occupied the property in September 2012.

In 2013 Mangwende, according to Rogers, signed an agreement with Minister Chombo for the property to be sectioned off for sale, and the plots were advertised.

Rogers has been trying to get compensation for the stolen land, but he was advised that approaching Zimbabwe’s courts would be a waste of time, “because they are all Zanu (PF) and will rule in favour of Zanu (PF), because they’re all big mates together.”

The land is still registered in Bryan Rogers’ name at the deeds office, indicating that the acquisition has not been regularized by the deeds registry.  The land is now occupied by a cooperative which has been selling 2100 square meter stands since 2013 through Darwin properties for $20 per square meter. The beneficiaries of the stands don’t have title deeds for the individual stands (301-350) on the General Plan.

“Long before the land acquisition took place, I had rights to sub-divide my property into 60 plots,” Rogers told The Zimbabwean this week. “I believe that 30 plots have been sold to date by Philip Chiyangwa, an estate agent.  Houses have been built on my property illegally – with no planning permission and no title deeds.   When I received planning permission to sub-divide, there were conditions to meet, infrastructure to put in place, such as roads, storm drains etc.  The houses that have been built have water and electricity – How did this happen if they have no planning permission?  No rates are being paid for the houses built – as far as the council are concerned someone high-up is pulling the strings,” he said.

“I also do not understand how people who have purchased the plots have managed to build big houses on a property with no Title Deeds or planning permission?  They must have paid cash as I doubt the banks would give them loans without Title Deeds  – which I still hold,” said Rogers.

Rogers has been told that the City of Harare will compensate him for the loss of his land. “To me it looks as though Chombo and his accomplices are pocketing the money for the plots and want the tax-paying public to pay me compensation for my property.  Not only have I lost the small holding, but my assets have been destroyed/stolen.  I’ve lost rental payments/loss of interest,” he said.

Now that there is a new dispensation in Harare and Chombo is being prosecuted for corruption, Rogers hopes that Mnangagwa will be as good as his word and ensure that compensation is paid to all those whose land was taken illegally. “I think that this would be a good case to take to court to show that the new government is dealing with corruption and to root out corrupt ministers within the government,” he said.