Community Action Accountability Teams established by communities that work with Heal Zimbabwe in Gutu, Bikita and Zaka have intensified their voter mobilisation campaigns. From 13th to 15th December 2017, CAAT teams conducted exchange visits and door to door campaigns in Bikita, Gutu and Zaka. 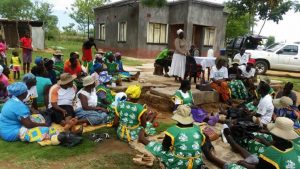 The purpose of the exchange visits was to allow the CAAT teams from the three areas to share their experiences in peace building, conflict mediation and success stories of their mediation efforts.

In a bid to also engage community leaders during the exchange visits, CAAT teams also conducted interface dialogue meetings with community leaders so as to address the increasing number of human rights violations emanating from the BVR process. Some of the community leaders who attended the interface meetings include nine traditional leaders, one councillor, 15 Ward Development Committee (WADCO) members and 10 Village Development Committee members, seven Health committee members and four School development committee members. At the interface meetings it was noted that most traditional leaders were receiving directives from ZANU PF local leadership to compile serial numbers of voter registration slips from community members. CAAT members who facilitated the interface dialogue meetings encouraged people to report any human rights violations emanating from the BVR process to the Zimbabwe Electoral Commission (ZEC) and the Zimbabwe Human Rights Commission (ZHRC) for redress.

The exchange visits by CAATs seek to build social cohesion and resonates with the organisation’s #13million Voices for Peace Campaign, a campaign that seeks to encourage and mobilize citizens to pledge for peace ahead of the harmonised elections slated for 2018. In the past, CAATs carried out BVR monitoring exercises and through the facilitation of Heal Zimbabwe, managed to report cases of human rights violations around the BVR to the ZHRC.

CAATs are safe space groups of women and youths from diverse religious, political and socio-economic backgrounds working together to build peace and demand social accountability from duty bearers.