The life of former Finance Minister Ignatius Chombo after the removal of Robert Mugabe has not been rosy – Chombo was yesterday arrested again and this time for criminal abuse of office over the way he handled the Garikai/Hlalani Kuhle programme in Whitecliff farm. 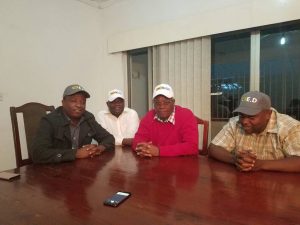 The arrest comes a day after he came out in pictures wearing regalia inscribed with President Emmerson Mnangagwa’s initials. ZANU PF has since issued a warning as it banned him from wearing it.

When the army took over power last month, Chombo was arrested by the army, detained for more than a week and then after being returned to his house, he was arrested, this time by the Zimbabwe Republic Police.

Chombo was arrested while reporting at Marlborough Police Station as part of his bail conditions on other corruption charges he is facing. The state media interviewed his lawyer Professor Lovemore Madhuku on the development last night.

“He was arrested while making his last report. Remember he is supposed to report three times a day. He was picked up by the Zimbabwe Anti-Corruption Commission and they took a warned and cautioned statement before they released him into my custody,” he said.
On the fresh charges, his client was facing, Prof Madhuku said: “They are ridiculous charges relating to operation Garikai/Hlalani Kuhle in Whitecliff.

“They claim he illegally settled people in that area on a property belonging to Pfugari. They said it was criminal abuse of office. We extensively told them that was a Cabinet organised programme and he was simply head of a committee that spearheaded that programme.

“They also added some charges before releasing him. He is at home. We went there at 5pm and we left around 8pm. We wait to see whether they take him to court or they will simply add those charges to the ones he is already facing.”

Chombo is on $5 000 bail on corruption charges and he is expected back in court on January 8. – state media