Government has condemned fare hikes by bus operators ordering the companies to stick to stipulated charges or risk losing their licences. 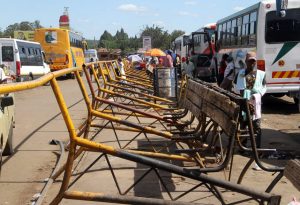 In an interview yesterday, the Minister of Transport and Infrastructural Development, Dr Joram Gumbo said fare hikes were unjustified as they are tantamount to ripping off the public.

Dr Gumbo said he was going to take up the issue to Cabinet so that Government can swiftly address the matter.

He said his ministry as the regulator for the transport sector will be forced to withdraw licences for operators found wanting.

“I only give permits. I don’t have anything to do with pricing but if people are using prices which are not correct that becomes a police case. We don’t encourage fare hikes because that is making life very hard for people, we are seeing that happening in shops, prices of groceries have gone up,” said Dr Gumbo.

“It’s not fair. If I am to know which bus company is doing it I will actually ask officials from my ministry to withdraw their permits because it’s not fair.

People must learn to comply with the law. They have made their fares to be known, they should follow those fares.”

“I exhort all retailers and service providers to desist from wantonly increasing prices. I urge us to stop profiteering tendencies; let us have the people at heart; let us give our new economic era a chance. We can achieve this by working together and putting our nation first,” he said last Friday.

For example, buses plying the Bulawayo- Harare route had increased their fares from $13 to $17 while those for the Bulawayo-Tsholotsho jumped from $6 to $9.

Those plying the Victoria Falls to Bulawayo route increased their fares to $20 from between $13 and $15.

“We are entering the holiday season, it’s normal for us to hike bus fares.  We have to profit in this travelling season.

“Some of the buses might have not increased the fares today but if you come tomorrow it will be a different story. They won’t be charging the same,” said a bus conductor, who declined to be named.

Some travellers argued that the price hike was not justified.

“Why is it that cross border buses have not increased fares yet our local buses want to rip us off? We are already struggling, prices for groceries have shot up, what kind of a Christmas are we going to have with our children? Someone has to put a stop to this,” fumed Mrs Patience Manyeruke.- state media