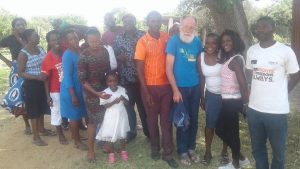 So we have hit the headlines without rivers of blood in the streets.We’re relieved at that. Everybody seems happy that the Old Man has been put out to grass at last, and his mad wife has had her comeuppance. But is that enough? Is it enough that our new president (interim or whatever) is not Robert Mugabe?

Next morning As I went through the market this morning, one young man, apparently a stall holder, shouted; “We are in a new Zimbabwe!” All the others eyed him quietly then one or two said; “why doesn’t he shut up?” When someone remarked that we’d got a fox guarding the chickens, there was a general murmur of agreement. That image may circulate faster if we talk about a crocodile herding the goats.

As for the crocodile himself, he promised us a cabinet of not more than 15 ministers (Mugg’s last list had about 60); on Friday he announced he had chosen 22, plus 10 “resident ministers” one for each province, and 6 deputies. There was an immediate outcry because he had included the outgoing minister of education, the most unpopular of Mugg’s ministers and had included 10 who were not MPs, though he is allowed 5. If he continues the ZANU way of operating, he’ll need 60 ministers, to keep every little local gang chief happy with his snout in the trough. The problem for the past few years has been that there isn’t enough in the trough for 60 greedy pigs and all their inevitable hangers-on.

It has been suggested that Mugabe’s removal was an elaborate plot, scripted by him and the croc, to reinvent the ZANY image. If so, it didn’t work for more than 48 hours.

People rejoiced when Mugabe was removed.

They were happy that his removal was carried out almost bloodlessly. (One of his most corrupt ministers was so badly assaulted by the soldiers who “arrested” him that he can’t be expected to defend himself in court for quite a long time and a photo went viral of a ZBC editor who had been badly battered when they took over the radio station.)

They were happy that the police were removed from the streets. Now people could drive across town or sell cabbages in the street without being constantly harassed by youths in grey trying to extort bribes, including by force. [Tu 5 Dec:] Their joy didn’t last long. The army drove vendors out of Mutare city centre yesterday and threaten Harare today.

People are happy to have discovered some change is possible They won’t be satisfied till we have free and fair elections and the results are respected, as they were not in 2008, or 2002, 2005, 2013.

They won’t be satisfied till corrupt politicians can’t escape punishment by declaring loyalty to the current boss. Politics in the past few weeks have been a great game of “follow the leader”; all the fat cats who voted with the mob a couple of years ago to replace Vice-President Joice Mujuru by the croc voted last month with the mob to remove the croc to make way for Mugg’s mad wife and last week they voted with the mob to remove the old man and his mad wife. Tomorrow they might turn on the croc again, but the rest of us can’t let the game go on much longer. People want real change, not just more political games, not even if they are gladiatorial, wth real blood.

1.      those responsible for the genocide in Matabeleland 1983-7, in which at a conservative estimate, 20,000 civilians, mostly women and children, were brutally murdered

2.      those who looted diamonds wholesale in the Congo around 1997 under the pretext of defending Laurent Kabila’s government against rebels

3.      those who, according to the UN special envoy Anna Tibaijuka (from Tanzania) destroyed the homes of 750,000 people and the livelihoods of 2.4 million who were accused of “voting the wrong way” in 2005

These questions lead right to the top.

I have still to register to vote. My main motive for taking the trouble is that certain people want to discourage urban people from voting, so I will try this week. That doesn’t mean that I will vote, unless I am satisfied that the whole process is not too crooked. Totally clean and above board is too much to ask for at the moment, but a little less crooked than Florida in the US presidential election of 2000; is that too much to ask for? We’ve been reminded recently of Stalin’s famous saying; “The people who cast their votes don’t count; the people who count the votes are the ones who decide.”

We’ve had enough of that.

Did you notice that when the world press noticed something was happening here BBC could only find one person to interview: Richard Dowden, of the Royal Africa Society, who supports the croc as a Napoleon to put an end to the sporadic Jacobinism of the Mugabes? Or contrast that with Al Jazeera, who had that bright young lady Haru Mutasa on the streets of Harare interviewing people and getting a very different view?

And so the the broader world: I am encouraged to see how many American citizens are prepared to defend their constitution and their less powerful neighbours against their president. They still have an uphill struggle and deserve all the support we can give them.

By his crazy logic, Trump can’t justify himself against Kim Jong-Un: If Trump is entitled to bully the world with threats of nuclear war, Kim can’t logically be denied the right to retaliate with a few nuclear threats of his own.

Against Iran, he is simply emulating Heinrich Himmler (as in “Himmler was very simmler . . .”) who said the bigger the lie, the better, and repeat it till it sticks. The UN Atomic Energy Agency has inspected Iran more frequently than any other country and are convinced there is no Iranian nuclear weapons programme. Of course, they have not been allowed to inspect the US or Israel.

Don’t tell me he couldn’t stop the blockades of Qatar and Yemen as quickly as he started them.

And who could defend his campaign against the free press, ranging from Al Jazeera to anything in the US to the left of Fox News?

But he seems determined to go to war and he has support from the US lumpenproletariat. Last year, they were really voting for Homer Simpson. He represents something deep-rooted in US society. Look at how powerless a nice guy US president is: Barack Obama promised at his inauguration to close Guantanamo Bay within 12 months, but didn’t succeed within his 8 years in office and ended up sending men cleared by a military tribunal (which takes some doing) to rot in some deep Yemeni dungeon, or Jimmy Carter, who tried to bring peace to the Middle East but his conference only consolidated the growth of that militarised monster, the modern state of Israel. The Kennedy brothers were too good to live: Jack may not have been the brightest, but he stepped far enough out of line; Bobby was sharp so he was a real threat and couldn’t be allowed to even stand for President.

But back to our own problems. The “bond notes” issued to supplement scarce US$ (the main currency) have been officially demonetised, but this doesn’t solve the country’s money problems. Money in the bank is worth a lot less than its face value because government have been issuing far more electronic transfers than the money held by the banks can cover. I’m not sure how that works, but putting it right is not an overnight task. It is still a bad idea to put money into the bank, unless you were paying bond notes into the account of the taxman, the electricity supply authority or a government school, because they are bound by law to accept them as equal to real dollars. Funny things happen to the exchange rate of real money; for example there is little local demand for euros, so only the banks will give you the official rate, but they keep the money in your account where it is worth about 40% less than face value. On the streets €1.000 = $1.000.

We struggle along. Our counselling work is least affected in Mozambique, because we keep as much as we can overseas and can pay direct to Mozambique.

The spinoff activities, that is the “I am Mbare” group, will need your help, mainlyto continue teaching some 80 destitute orphans who can’t afford formal school. They also play a large part in the cleanups in Mbare, held nearly every month. They visit the destitute elderly residents of the local Mother Teresa home and co-operate with a number of youth- and childrens’ rights groups to help young people help themselves. For example, we are invited to an event to oppose violence against children next Friday, sponsored by Medecins sans Frontieres. History talks continue as we find more elderly residents who are happy to share their recollections with young people. Send any donations to Jesuit Missions London, but please also drop me a line to tell us about your gift; JM stopped sending monthly statements of account at the end of September and intend to send only six-monthly statements. I asked them to reduce the interval to three months, especially so that we can thank the givers of Christmas gifts in good time. I have had no response yet to that request. Now there are less British jesuits here, they have less of those “personal accounts” to handle. Could you please drop me a line by e-mail or a short message on whatsapp (+263 772 356 028) so that I know what to expect. Thanks.

and for anyone who wants to contribute, our bank details for gifts are: