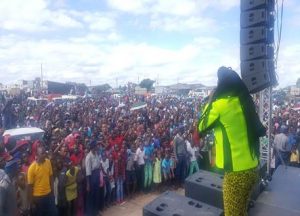 On 09 December 2017, Heal Zimbabwe took its National peace campaign: 13 Million Voices for Peace to Zaka where it conducted a peace concert at Jerera Growth Point. The objective of the peace concert was to popularize the national peace campaign and afford citizens an opportunity to pledge for peace during the Biometric Voter Registration (BVR) and after the 2018 elections. The peace concert was also aimed at mobilizing community members to register to vote ahead of the 2018 elections.

The concert was held in collaboration with the Election Resource Centre (ERC) and the Zimbabwe Human Rights Association (Zimrights). The peace concert was attended by public officials who include the District Administrator (D.A) for Zaka, Zimbabwe Electoral Commission (ZEC) officials, two Legislators, three Senators, two Chiefs, 16 Village heads and three Councilors. The concert was attended by 2500 people. In the morning, ZIMRIGHTS and representatives from ZEC took time to raise awareness and educate community members on the BVR process. ZEC officials stationed at Jerera nursery school registration centre were also grateful and acknowledged that 350 people registered on the day, a record number at the registration centre given that in the previous days they would only register between 60-80 people per day. Heal Zimbabwe also provided four Commissioners of oath to issue proof of residence free of charge and ensured provision of administrative and technical support to prospective registrants by the ERC and Zimrights.

Before the concert, Chief Nyakunhuwa urged Traditional leaders to desist from perpetrating human rights violations such as forcing community members to submit serial numbers and partisan issuance of proof of residence.” Traditional leaders must not perpetrate human rights, now we hear that there are some unscrupulous Traditional leaders forcing community members to submit serial numbers and denying proof of residence for political reasons. This must stop, let us all practice tolerance, elections should not breed violence but we must remain united as a community and repel forces that trigger electoral violence”, he said.

In a bid to encourage community members and leaders to build peace, Heal Zimbabwe facilitated for photo sessions where each community member would reaffirm their bid to pledge for peace by posing for a photo with placards that denounce political violence. The instant photos which were given to the participants act as a reference point to hold community members accountable in the event that they perpetrate human rights violations in the future. The concert also afforded community leaders such as Councillors, Legislators and Traditional leaders to pledge to uphold peace during the BVR process as well as ahead of the 2018 elections. Edu-tainement at the concert was provided by renowned Dancehall artist, Winky D who also sang about the importance of peace and tolerance in Zaka.

The peace concert in Zaka come at a time when Heal Zimbabwe has launched a nationwide peace campaign by conducting various peace awareness raising activities. Some of the activities include peace concerts, sports for peace tournaments, clean up campaigns, community interface dialogue meetings, target lobbying and nhimbes. These initiatives encourage citizens to pledge and uphold peace ahead of the 2018 elections.