After decades of unceremoniously pulling off the popular Francistown – Bulawayo passenger train, the Botswana Government led by retiring President Ian Khama has reintroduced the train service with effect from yesterday. 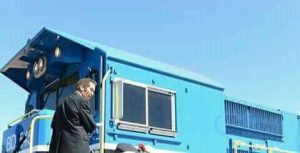 Botswana Railways made the announcement on the train service resumption through an official Botswana Government notice on Wednesday.

“Botswana Railways wishes to advise its valued customers and the general public that with effect from December 20, 2017 the passenger train service will be extended to Bulawayo,” read the government notice.

The very popular train service was unceremoniously called off by the Governmemt of Botswana at the helm of former Zimbabwean President Robert Mugabe government’s economic collapse in a move that was seen by many as sabotage to Mugabe by his Botswana counterpart Khama.

Khama who never hid his dislike of Mugabe’s regime is on record insisting that his Government would give little economic assistance to its neighbouring country as long as Mugabe remained in power.

The return of the train is expected to significantly reduce congestion at the Plumtree boarder post between the two countries as the train has been the traditional favourite of cross border traders.