The Morgan Tsvangirai led MDC said President Emmerson Mnangagwa was fooling Zimbabweans that he is committed to curbing corruption by persecuting members of his party’s one faction. 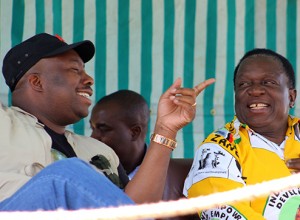 The party’s national spokesperson Obert Gutu, said this on Thursday while reacting to the freezing of two former cabinet ministers, Professor Jonathan Moyo and Saviour Kasukuwere’s accounts by the government through the Reserve Bank of Zimbabwe.

The two former ministers were critical to Mnangagwa before he took over power from the former President Robert Mugabe with the assistance of the military, two weeks ago.

Prof Moyo and Kasukuwere’s whereabouts are unknown since the taking over of power by Mnangagwa.

“Certainly, there are other top Zanu PF politicians, over and above these two men, who should also be investigated for alleged corrupt deals. Even some recently appointed Cabinet Ministers have got a prima facie case of corruption against them,” said Gutu.