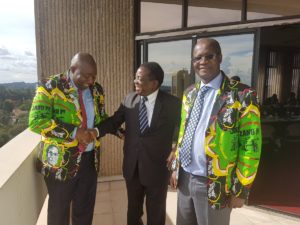 A government instruction names the two’s estates as subject to government control following an investigation.

Below is the order:

1) You are directed to identify and immediately freeze:

(i) all accounts in the name of the above-named individuals; and

(ii) any accounts in which the said individuals are directors or have a known beneficial interest.

2) You are further directed to submit, in writing, a return to the Unit, by no later than the 8th of December 2017, listing and giving particulars (including balances) of all the accounts that you would have identified and frozen in terms of this directive.

3) Where you have not identified any relevant account, you shall, nevertheless submit a nil return.

4) Where you are in doubt regarding whether or not any particular account is linked to the named subjects, you shall contact the Unit for further direction.

5) The effect of the freeze is that, (except any inflows into the account, which shall be processed normally and immediately notified to the Unit) no other transaction shall be processed from a frozen account, until further the Unit directs otherwise.