Merry party of Mnangagwa and Chinamasa with Afreximbank officials 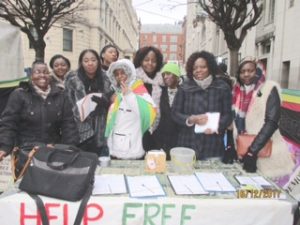 An obscure Cairo-based bank has advanced Mnangagwa the money to launch Zanu PF Mark II in its new PF incarnation as the pragmatic fascist party – rather on the lines of the Egyptian regime itself.

Having swept away Grace Mugabe and her 40 groupies, Mnangagwa seeks to present himself as the modern Mugabe. He certainly sees Zanu PF in the same way: the party is the state, generals are party stalwarts and the constitution is what he says it is.

Only two years ago Mnangagwa said that those who do not support Zanu PF deserve to die (see: https://iharare.com/i-wish-i-was-god-so-that-i-could-kill-tsvangirai-and-all-his-supporters-says-vp-mnangagwa/). ‘We will continue to rule this country despite their shouting about electoral reforms’, he declared. Unsurprisingly, Mnangagwa was speaking at the commissioning of a water treatment plant in Masvingo rehabilitated with donor funds.

Despite promises at Friday’s party congress of ‘credible, free and fair’ elections, Mnangagwa has hinted that the polls due about August, may in fact take place earlier – although there is no acceptable voters’ roll and none of the recognized provisions for credible elections are in place.

Presidential adviser Chris Mutsvangwa told the congress that the military would play a big role in the elections: ‘We will win resoundingly, better than the 1980 elections, and we will mobilise heavily working with the Zimbabwe Defence Forces’, he said.

The $1.5 billion loan that Mugabe is getting –  sorry, we meant Mnangagwa – has emboldened him to demand that the West scrap sanctions which, like Mugabe. he pretends are the main cause of Zimbabwe’s economic meltdown. True to Zanu PF, he can only repeat what has worked in the past.

Mnangagwa says he wants new relations with the West and that he seeks Western investment. The Vigil thinks that it must be made clear to him that there can be no prospect of re-engagement until there are free, fair and internationally-monitored elections.

Zimbabweans may find an easing of the bank queues. This will be accompanied by talk of action against corruption. But the target of this will be the informal sector: the poor touts, vendors and squatters – the victims of the mafia bosses who compose the top level of the Zanu PF party who will now merrily loot $1.5 billion of Afreximbank’s money, deploying the army to keep the povos quiet.

And then the money will run out again . . . We trust there will be enough to continue paying Mugabe’s pension and expenses. The Vigil warned in our recent book ‘Zimbabwe Emergency’ what would happen if Mugabe went but Zanu PF remained in control: ‘They say the leopard never changes its spots. Our fear is that, with the departure of Mugabe, the people of Zimbabwe may again have the Zanu PF leopard foisted on them in some form or other. For the likely results be warned by these pages.’