In his last days in power ousted President Robert Mugabe managed to outsmart his rivals in the ruling Zanu PF party, causing them to opt for military action. 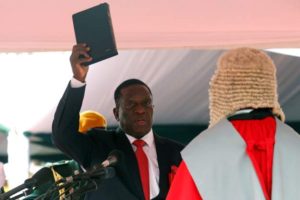 The Zimbabwe Defence Forces early November surreptiously seized power ending Mugabe’s almost four decades rule, with a senior minister coming out to reveal this was the only way smart Mugabe and his G-40 could be removed.

Local media reports that the newly-appointed Minister of State for Masvingo Provincial Affairs Josaya Hungwe stunned party members during a Provincial Coordinating Committee (PCC) meeting when he revealed that Team Lacoste faction had to use the army after they had been outsmarted by Generation 40 (G40) faction.

Hungwe added that the defeat by G40 was a clear indication that former president Robert Mugabe was smarter than his successor President Emmerson Mnangagwa.
The Masvingo Godfather revealed that the reason why the military ‘stepped in’ to elbow out Mugabe and the G40 faction was because Mnangagwa and Lacoste faction had completely failed.
Mugabe who has been under house arrest has for the first time been allowed to leave the country to seek medical treatment in the Far East. While Mugabe’s former spokesperson refused to comment on his trip, the local Newsday reports that,

Mugabe will make a stopover in Malaysia, where his daughter Bona is expecting a second child, before leaving for Singapore for his routine medical check-up. Sources revealed that the UM1 yesterday had a scheduled 20- hour flight.

The 93-year-old ex-leader’s former aide and now Mnangagwa’s spokesperson and Information ministry permanent secretary, George Charamba, could not give details, saying he was not in touch with Mugabe anymore.