Zanu-PF’s Extraordinary Congress in Harare this week will not elect leaders, but largely endorse Central Committee resolutions passed on November 19, 2017. 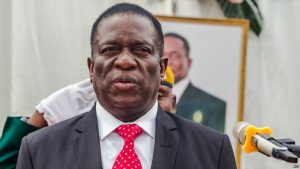 Zimbabwe’s new President Emmerson Mnangagwa presides over a swearing in ceremony as his new cabinet took office on Dec. 4, 2017 at State House in Harare.

President Emmerson Mnangagwa will be endorsed as party President and First Secretary and 2018 presidential candidate, and he will use his discretion whether or not to appoint his deputies and a National Chair then as Zanu-PF gears for the 2018 harmonised elections.
In an interview with The Sunday Mail yesterday, Zanu-PF Secretary for Information and Publicity Ambassador Simon Khaya Moyo said, “This is an Extraordinary Congress and as such, it will discuss only that business for which it has been convened.

“There are basically three issues that will be on the table. The first one is to confirm our President and First Secretary of the party. The second one is to endorse His Excellency, President Emmerson Mnangagwa, as our candidate for the 2018 harmonised elections. The third aspect is to endorse Central Committee resolutions that were made by the last committee which met on November 19.”

Ambassador Khaya Moyo said President Mnangagwa would appoint his deputies and a National Chair at his discretion.

“What is also important to note is that we are not going to have thematic committees. There will also be no elections at the Congress. In general, it is a non-elective Congress. However, there are vacancies in the party, which are that of the two Vice-Presidents and the National Chairperson.

“The President of the party may decide to appoint these during the Congress, but he is not obliged to. He can choose to announce the appointment at the Congress or at another stage.

“There are also other vacancies that have arisen in the Politburo, so the President may also decide to appoint them, but it is all up to him.”
On the one centre of power concept, he said: “That is not an item on its own. It was one of the resolutions of the last Central Committee, so the Congress will decide whether to pass it or not.

Ambassador Khaya Moyo said the Congress would start a Politburo meeting on Tuesday, followed by a Central Committee meeting the next day. The main indaba will be on Friday.
“All preparations for the Congress are going on well. The sub-committees are going at full throttle to ensure that the Congress starts and ends well as per schedule.

“Currently, accreditation is going on in all provinces, and other delegates who are not from the provinces will be accredited at party headquarters.

“Dates for the Congress are December 12th to 16th. On the 12th, there is going to be a Politburo meeting while the Central Committee meeting will be on the 13th. The 14th is reserved for the arrival of guests. Congress proper will take place on the 15th, and on the 16th the delegates will depart.
“Sub-committees are working flat out on their areas of responsibility. They will report their progress to the Politburo, which will then report to the Central Committee.”

The number of days for Congress and budget were cut in keeping with President Mnangagwa’s vision to commit more time to real work while limiting expenditure.
The budget was slashed from US$8 million to US$3 million.

It decided against Central Committee elections, meaning the present committee will provide delegates to the Extraordinary Congress.

Further, the meeting resolved to improve the standing of war veterans and reinstate District Co-ordinating Committees which had been abolished.