Police have arrested over 1 600 people at Beitbridge Border Post in an ongoing operation to restore sanity at Sadc’s busiest inland port of entry. 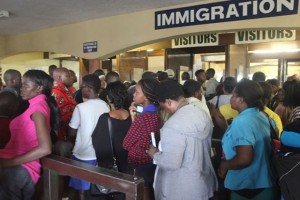 “These were arrested in an ongoing operation between 4 and 10 December. We have noticed that there are people who want to take advantage of the festive season and do as they please at the border.

“As police we won’t stand aloof and give them a free reign. The border clean-up exercise is continuous, until people start abiding by the laws of the land,” she said.

Asst Insp Mangena said some of the suspects will appear in court in due course.

She warned members of the public against engaging third parties and dealers within the border, who in most cases end up duping them.

“We will not rest until the border is clean. Let those engaged or planning to execute criminal activities know that their days are numbered,” said Asst Insp Mangena.

In a related incident South Africa’s department of immigration intercepted a vehicle that was transporting 16 undocumented children to that country.

Sources at the border said the immigrants were aged between four and 17 years.

“The driver of the South Africa registered Toyota Hilux is still detained on that country’s side of the border,” said a border official.- State Media