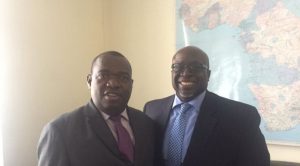 While the contents of their brief were not immediately available, Ambassador Thomas wrote on twitter, “Pleased to meet new Foreign Minister Moyo and exchange views on a constructive way forward @usembassyharare.”