The state media claims that former Zanu-PF spokesperson Mr Rugare Gumbo is set to make a sensational return to the party. The article comes after Gumbo was spotted at the ZANU Pf Conference on Friday. 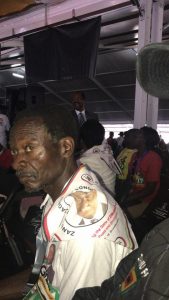 While Gumbo had not made his motive known, the state media cast forth planks pointing to a literal return to ZANU PF. If it turns true, this will be three years after his expulsion for his association with former Vice-President Joice Mujuru.

Mr Gumbo has been spotted at several party and Government functions with the latest being the just- ended Zanu-PF Extraordinary Congress in Harare on Friday where he attended as a member of the war veterans association.

Speculation has thus been rife that Mr Gumbo, a renowned freedom fighter is contemplating rejoining the revolutionary party following the crumbling of Zimbabwe People First due to power struggles and divisions.
Zanu-PF Midlands provincial chairperson Engineer Daniel McKenzie Ncube confirmed that Mr Gumbo had verbally expressed his willingness to rejoin the revolutionary party but was still to formalise his interests.

Contacted for comment, Mr Gumbo was diplomatic about it but hinted that there was a possibility of him rejoining Zanu-PF.

“I have been attending State functions of late and on Friday I attended the Zanu-PF Extraordinary Congress. I did so as a war veteran and as an observer so people mustn’t read too much into it. It (rejoining Zanu-PF) would be a good thing, however, provided that certain things are clarified.

“I am not a young person itching for positions, I am past that stage. All this I’m not doing it on my own, there are certain people who are supporting us and making suggestions,” he said. – state media