An official in the Morgan Tsvangirai led MDC has said the opposition party will not apologise to anyone for sending emissaries to the United States of America to present the current state of affairs in the country. 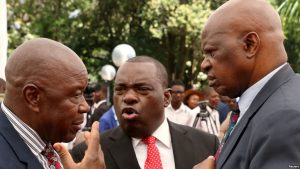 Responding to a barrage of attacks from progovernment elements, MDC Director of Information and Public and presidential spokesperson, Luke Tamborinyoka said there was no need to apologise for the USA trip to anyone.

In a comment he posted on Facebook on Friday, Tamborinyoka said the MDC would not be deterred by unruly elements bent on frustrating democratic processes.

“We owe no one an apology for a global campaign for a return to legitimacy through free, fair and credible elections,” said Tamborinyoka.

Last week President Emmerson Mnangagwa’ s advisor, Chris Mutsvangwa went ballistic as he attacked Tsvangirai accusing him of setting untenable conditions for the formation of the much anticipated transitional authority.

MDC Supporters immediately threw their weight behind Tsvangirai for refusing to be used by Zanu PF to authenticate the system.

Tsvangirai is expected to speak on the current political developments in the country after returning from South Africa where he had gone for treatment.