MAFUKE, Zimbabwe (Thomson Reuters Foundation) - Farmers in Zimbabwe are anxiously watching their crops, fearing the return of a plethora of new pests that recently spread to the southern African nation and devastated harvests this year. 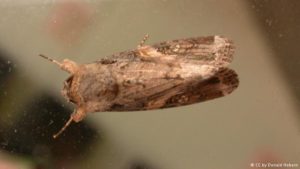 “We don’t know what is happening,” said Lovemore Muradzikwa, a small-scale maize farmer in the Mafuke area of eastern Zimbabwe, who said he has already seen some of the pests return.

“There are small worms destroying our crops. They are eating even wild plants. We don’t know what they are,” he told the Thomson Reuters Foundation.

And the arrival of new pests – some of them adapted to the changing conditions – is making life even harder for the region’s embattled farmers.

Fall armyworm destroyed 20 percent of the country’s maize crop last season, according to government figures, at a time when the country was recovering from devastating drought that had left more than 4 million people dependent on food aid.

The pest is a native of the Americas and was first spotted in Africa in 2016. It has since spread across the continent.

“Our agricultural extension officers are on the ground teaching farmers across the country about fall armyworm. We are advising farmers to report any sightings of fall armyworm as soon as possible,” Mharapira said in a telephone interview.

Fall armyworm was first seen in Zimbabwe in September 2016, and became more prevalent in January and February when it was spotted across the country, according to a joint report by the government and U.N. agencies.

Some farmers “resorted to handpicking and squashing the worms in an attempt to control them”, or used pesticides. But 60 percent of farms affected by the pests did not take any measures to control them, resulting in extensive damage to crops, the 2017 Rural Livelihoods Assessment Report said.

Many countries in Africa have reported other new crop pests and diseases including banana bunchy top virus in Mozambique, South Africa and Malawi, and maize lethal necrosis in Kenya, Tanzania and Rwanda, and elsewhere.

Globally, the spread of pests and diseases across borders has increased dramatically in recent years with trade playing a role as well as climate change, according to the U.N. Food and Agriculture Organization.

“Agriculture extension officers must work hard to educate farmers about these new pests,” he said.

“We are not sure yet whether we will face the same armyworm problem this season. Many farmers were caught unawares … Farmers do not have knowledge about these new pests,” Zimunya said. (Reporting by Andrew Mambondiyani, Editing by Alex Whiting.; Please credit the Thomson Reuters Foundation, the charitable arm of Thomson Reuters, that covers humanitarian news, climate change, resilience, women’s rights, trafficking and property rights. Visit http://news.trust.org/climate)