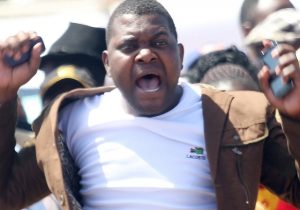 Charumbira died in a road accident about 40km outside Harare 5km before the Norton Toll Plaza on the Bulawayo Harare highway in the early hours of Monday morning.

Charumbira is famous for booing former First Lady Grace Mugabe at a rally in Bulawayo in November shortly before the military intervention that saw the removal of former President Robert Mugabe who was replaced by incumbent President Emerson Mnangagwa.

Since the take over by Mnangagwa, Charumbira had made more enemies than friends for himself in Zimbabwean politics as he went wild forcing the Mnangagwa presidency on people within and outside the ruling ZANU PF.

In December he was also assaulted by members of the same party when he went wild harassing street vendors in Bulawayo forcing them to declare allegiance to Mnangagwa or they be removed from the streets.

Mid last year he was also thoroughly beaten by fellow ZANU PF members at a party meeting in Bulawayo as ZANU PF factionalism peaked in the province.

Details of the accident were still coming through and ZimEye.com willl provide these as they become available.