The ruling ZANU PF party says that it is introducing a school of ideology to educate its members on the values of the party and produce prospective leaders. 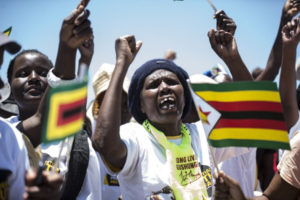 The party Deputy Commissar Omega Hungwe announced over the weekend.

Addressing party supporters in Masvingo on Sunday, Hungwe said that the school of ideology was necessitated by the emerging of new and young party members who did not understand the values of the party.

“The party was nearly destroyed because some who were in the leadership of the party didn’t even know the history and the values of the party,” she said.

Hungwe said that all party members interested in assuming leadership positions in the party will now be required to go through the ideology training session before being considered for any position in the party.

“You will want to be councillors or MPs or to hold positions in the party and we will demand production of the ideology certificate which then calls on everyone to undergo the training,” she said.

Hungwe said that the party will be starting the training of trainers exercisers on Monday next week.

It is not clear when the certificate requirement will be effected nor how long the training will be.

The party will be holding primary elections for the 2018 election candidates on the 4th of March.

ZANU PF suffered a huge administrative and political crisis in the last five years as younger members began wrestling for positions in the party resulting in the formation of the G40 faction which sort to clear most of the party old guards for a new generation leadership.