Global business giants and political leaders have lined up to secure appointments with President Mnangagwa who is in Davos attending the 48th World Economic Forum (WEF) annual meetings, the state media has reported. 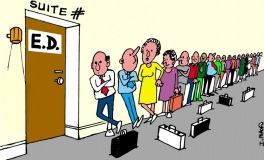 The President hinted before his departure on Monday morning that over 60 heads of State and Government had requested to meet him on the sidelines of Davos meetings, one of the biggest global business gathering.

Special Advisor in the Office of the President Ambassador Christopher Mutsvangwa, who is part of the Zimbabwean delegation, said the President had already confirmed a number of meetings, including with representatives from Dutch technology giant Phillips, New York headquartered global management consulting firm McKinsey&Company, Royal Dutch as well as a number of Indian business leaders.

“You know the top companies, which have delivered highest level of prosperity to the world are all here. For example, we have companies like Mckinsey, Royal Dutch asking for appointments; Phillips, Goldman Sachs, Lazard and we have top Indian companies like Hinduja,” Ambassador Mutsvangwa said. Zimbabwe is using the global conference to mend ties with the global community as it seeks to revive its economy.

This comes as President Mnangagwa has indicated since he took office in November last year that it was critical that Zimbabwe reintegrates with the international community as part of broader efforts to rebuild the economy.

As such, the 48th WEF provides President Mnangagwa a befitting platform to make his pitch to an array of global investors to consider Zimbabwe, as part of shrill calls for foreign capital to track its way to Zimbabwe, which presents innumerable investment and business opportunities under a new economic order.

“Here we are not focused on Zimbabwe as a market itself except in so far as we are selling our resources, our very high human resource index, to produce world class goods made for global community, we have absolutely no reason why Zimbabwean goods cannot be found on the shelves of department stores across the globe,” he said.

Ambassador Mutsvangwa said the President was ushering a new economy, premised on a huge injection of capital.

“A huge injection of capital is premised upon what a country is capable of doing in terms of utilising that capital, and the competence of Zimbabwe’s educated labour force is not in doubt. We have a sample of it already, which has left the country as the diaspora; they do well earning hard currency in various host countries where they have gone to, which shows that generally Zimbabweans are very competent. If those who went abroad can be so competent it means those who remained at home can deliver miracles,” he added.

Yesterday, President Mnangagwa had a lunch meeting with Angola president João Lourenço, Mauritius president Ameenah Gurib, as well as representatives of Indian company, Ashok Leyland. An Ashok representative said the company was confident that Africa was the next growth frontier.

“Ashok has been around for a long time and in that period we have always seen ahead of time. We were the first ones to leave Iran when we noticed that things have turned. We did the same thing in the Middle East.

“At present we are just in love with Africa. We see a great future and we feel we have to help and support its economic growth,” said the official.